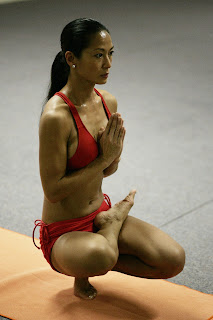 A few years ago I got into yoga.
This is about as far away from my hyperactive nature as it gets.
For someone who lives the motto agito ergo sum, yoga is a bit of a stretch. But, I thought it was time to conquer it.
Right.
Such a thing to say for a hyperactive.
A lot of the people in my circle were practicing it so in an effort to put an end to their solicitations, I gave in.

The first time I went to class I remember having this strong urge to look at my watch, check my text messages, and be on my computer which is basically as far away from a yoga frame of mind as it gets. Then, towards the end of class I remember wishing to be there a little longer. I can sort out my daily problems better lying on the mat here. Hmm.
Naturally, I went back.
We were doing yoga daily, or nightly, I should say. Incidentally, those of you who have trouble sleeping, might consider taking up yoga and more importantly, practicing it night.

Then, I switched to another workout routine after I found myself in a new setting. I thought I'd give massages and yoga classes a rest as I was sure not to find another Heather or Scott, (respectively, my masseusse and yoga teacher) in my new setting. I'm a loyal type of gal, I suppose. Or 'loyalty by convenience' as the person calls it.

The new workout regimen now consisted of what seemed to be more congruent with my nature: fast cardio, in other words. The routine consists of weight-lifting, swimming, and biking.

The body has been asking for a change, however. Ergo, in an effort to acquiesce its request, I took up yoga again. This time around I switched it up a bit, however.
I went for Moksha.

Well, I tried, at least.
The Moksha class takes place in a very hot setting. Moksha means "to release." It's the liberation from samsara, the cycle of death and rebirth or reincarnation and the sum of the suffering and limitation of existence. That's a paraphrasing of what it means, anyway.

I don't think I've perspired that much since the day I challenged a friend of mine to a match of tennis thinking that I could beat him simply because I was sure to have a stronger work ethic and more will power. I didn't win. But I did get a great work-out and yet another lesson in humility.

So, I find myself in a Moksha class. Here I am in a different setting, different city, different country, perspiring like it's nobody's business. After completing the warrior pose I realize I had forgotten to bring my water. And the class was 75 minutes. 75 minutes of heat intensity.

Towards minute 60, I start getting light-headed and I thought I better relent and find a way to water. Fast. The teacher brought me some and all was fine and dandy, of course, and in a minute I was back in a downward facing dog position again.

"I dig this," I thought. Cool, it's challenging. Now, I'm not sure if a reaction of this kind is what yogis generally have in mind. It was how I reacted at least.

Now, my usual workouts are not a walk in the park. I like to push. This class, however, takes the prize as the heaviest workout I've had in recent years. The body was much more challenged in the space of a little mat where movement is limited than it ever is at the weight room or the pool.

So, I give Moksha yoga classes my thumbs up. Don't forget to bring water and light outfits. I was told that I'm much more mellow after it. And I'll take mellow. Well, not every day but with some regularity, yes. For sure.
And, by the way, that's not me in the picture.
I still have short hair.

I've never had yoga in a heated room. Have always wondered about it, though. Will give it a try. With H2p by my side, of course.
My fave bit here: "And, by the way, that's not me in the picture.
I still have short hair."

Where was the class, btw?

So, did you reach Moksha?
It's a bit tough to reconcile the image of a mnt biker with a namaste-saying yogi....

don't forget that h20, breezer!
Are the classes skill-divided?

How often are you practicing?

I find it very hard to do the poses in Moksha classes because I'm dripping and my arms slide on my legs. Some of the poses are touch enough with dry skin. But you do get an amazing workout. My body hurt a lot after the few times, too. The mid-section too. You get an amazing workout.
I find I have to drink more after hours after I'm done.
Where is/was the class. btw?

-Right. The hair joke sort of begged to come out, what can I say.
-Reached Moksha? That's a rhetorical question, no?
-The classes aren't skill-divided. However, in Moksha flow classes it's a good idea to know what you're doing as it's pretty intense and as Becca noted, add the humidity/heavy perspiring et al., it gets especially tough to stay in position.
-About daily.

I love love love yoga. I haven't done it for about 6 months, and I miss it terribly. If I can squeeze some yoga in during school, I will do so.

Tip of the hat, Sra! Good eye as always.

This is supposed to be bad for you as it makes straining the muscles beyond their normal pain thresholds possible. I've heard this from multiple sources.