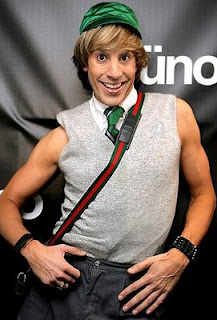 A screening of Brüno (2009) in a German-speaking setting is one thing. A screening of it somewhere else is something else.
I explain.
As a German speaker, I have a healthy list of reasons as to why this film vexed my ears. The whole grammar thing does a number on me. File it under occupational hazard.

As a moviegoer, I also have a generous list of reasons why this film is nothing more than a visual and audio nuissance. During the middle part of the film, I believe one of us uttered the following: "Was ist denn das?!?"

Sascha Baron Cohen's German is full of flaws. But that is not the reason why this film is so horrendous. I didn't go into the experience expecting him to break into some Goethe-informed soliloqui after all.

Brüno, the movie, is basically a rehashing of Cohen's Brüno character in his TV show Da Ali G show.
The literary scholar in me was annoyed by how grossly stereotyped gender and gendered portrayals were. More than a few 'dudes' were let out during the viewing. None of them were shock-informed. Mostly they were produced out of boredom, vexation, and annoyance.

I was bored to tears. More specifically, I was on the verge of leaving the theatre but in an effort to be not-so-rude and kind to my company, I chose to play with my iPhone instead. I turned into one of those people I criticize condescendingly in my mind when I'm at the movies. Since we were way in the back I didn't seem to bother the other moviegoers too badly by way of the iPhone light, but still, I felt like I was not using my time wisely by being there. The only other time when I and mine had the urge to walk out in the middle of a movie was when Once Upon a Time in Mexico opened. But that's a different story. In comparison, that movie seems like Gladiator now.

Brüno also managed to make me cringe a few times. I felt genuine embarrassment when he tries to trap former Republican presidential candidate Ron Paul in a sexually compromising setting. The camera angels were good in that scene. They captured Ron Paul's discomfort most effectively. I felt really badly for Paul and found myself shaking my head at the episode. Somehow, I failed to see the humor.

One thing the film managed to capture well, and I credit Larry Charles's good cinematic instincts here, was the conclusion of the film where a mullet-sporting Brüno is seen on a wrestling ring about to fight against Lutz his 'plain Jane' assistant's assistant.

I get what Cohen's doing here. He turns into a provocateur for the purpose of making the point that people are people and gender is gender. In this sense, Brüno is not any less 'normative' than say the rest of us. The way he goes about actualizing his premise however is old, tired, yes, boring.
In Brüno, Cohen reduces gender to nothing more than a cultural clichee. The performative aspect of gender however is a tricky thing to translate crossculturally. This is yet another area in which Cohen manages to fail.

I had hopes for Brüno. "It can't be that atrocious," I told my people. I mean, Larry Charles directed it. And I like Larry Charles. He's directed a lot of Seinfeld and Curb Your Enthusiasm episodes and he gets comedic timing. The thing is, even the smartest director is no cure to a tired format and sophomoric predictability. Talent can take one only so far, after all.

Ouch. So, to be clear, you're saying you didn't like it?
:)
Not surprised, actually.
Not my bag of chips, either. The whole "let's bash on the Southerners" thing is very, very tired.

I kept reading mixed reviews so, cool. Thanks for this. Will maybe catch it on dvd when it releases.

I was overall uncomfortable during the whole thing. And I'm no pride or anything. I just like to think I have a semi-decent brain that works ok most of the time.

But don't you usually contend that gender actually 'is' a cultural cliche? Or, am I reading your stuff wrong?

My sentence of the day from you today is:
"The thing is, even the smartest director is no cure to a tired format and sophomoric predictability. "
Ouch, BR, very ouch!!
:)

And I didn't like it either, by the way.

Well, I felt the same level of discomfort with Borat, so I suppose I shouldn't be surprised at this review. I thought the previews for Bruno looked pretty good, though, so I thought this might be different. I'll probably dollar theater it if I get around to it at all.

Wondered about this. Have no interest in seeing it, though. Borat was also obnoxious, as well.

Also, I'm amazed at the PR machine this guy has. No other movie is getting this kind of attention around here. I guess even if Brangelina did another movie together they wouldn't get this kind of hype.

This was certianly a refreshing review to read. I'm tired of hearing praise of a film that can be best described as an distasteful exercise in hipster irony.

I also liked this review as it doesn't provide yet another take on the genius that is Sascha Baron Cohen.
At best, he's a provocateur, nothing more.