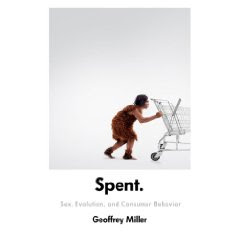 In his book Spent: Sex, Evolution, and Consumer Behavior evolutionary psychologist Geoffrey Miller examines what dictates our buying and spending decisions from lipstick to cars, from the texts we read to the music we enjoy.

For this book, Dr. Miller asked his readers to do the following exercise:

Then he adds: Count how many items appear on both lists.

Here are the things that popped up on both of my lists.

1) Travel - It's an indispensable component of my life. While my loved ones joke about my carbon foot-print and I counter that joke by saying, 'oy, I bike hundreds of miles a month. I'm making up for it,' travel has educated me in ways that are indeed incomparable. As I just noted to someone, I like travel because it keeps me honest.

2) Getting a PhD - Graduate work means all kinds of difficult as well as all kinds of happy. My years as a doctoral student were some of the most memorable ones. This is on both lists because, while it is a huge investment, it's also brought me a lot of happiness.

3) Apple gadgets - I'm a Mac-head. I converted over to Mac-ism when I was in college dating a Mac nerd. You've heard the saying, I'm sure, "once you go Mac, you never go back." Now, enlightened and on ship of hip, this is an investment that's yielded both high-frequency use as well as personal happiness. I know. Let it go. It's my list.

4) Indie rock shows. - As if I have to comment on this one! You can blame my interest in it on evolution.

5) Metropolitan Honda scooter - I used it almost as much as I use my Apple gadgets. It made me and mine very happy. Every time.


Which items made it on both of your lists?

Bri, Denim!!
Yes.
I miss getting on it and riding to the Roast and the pool.
You still have it?
Common list:
1 education
2 travel
3 books and cd's
4 break-up, post that is. Genetically I was predisposed to do it, I guess. :)

I'll make sure to read this book.

Truck
Divorce
In that order.

I guess mine would be my study abroad travel, my BA degrees (the experience of obtaining them, and not so much the degrees themselves), my Seagull acoustic guitar, and my Specialized hybrid commuter bike. Hopefully the law degree will make it to both lists, because it's about to become the most expensive thing I've ever bought.

Interesting exercise. I'll have to check the book out too.
The stuff that appeared on both lists:
1. travel
2. ortho mattress
3. a designer outfit. something very satisfying about a very expensive piece of clothing. i'm usually not that superficial but it does make me happy.
4. car. it's better than prozac when it comes to helping me unwind.
5. moving out and moving in on my own.
6. definitely my degrees. the experience made it all ok but they did cost a bunch of pretty pennies.

i forgot to include my DVD and wide music collection.
oh, and the framing of my prof. photographs.

i.e. professional photographs.
my black and white collection.
the frames cost but every time i look at them i feel successful.
weird, but true.

-House
-Eyeware
-Roadtrips
-Eating out at fancy restaurants before going to the opera.

-The experience of grad school. I don't work in the field I was trained but those years were awesome!
-Courting my gf
-My library
-Eating out

I forgot to say my Specialized. I love that thing!

And I should have included gym memberships....