Sam Mendes' "Away We Go": Do Stay There, Please! 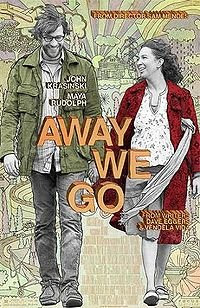 Away We Go, the new film by Sam Mendes annoyed me as much as a Judd Apatow concoction. Let me amend this a bit by way of being a tad kinder to Apatow. At least, with the latter I know what kind of merchandise he's moving. Ergo, I'm prepared.

In the case of Away We Go, Mendes tells the story of a young couple who finds out they're about to have a child. They live in a rural area and in a run-down shack-like domicile which happens to be in close proximity to the man's parents. Incidentally, they don't seem to have the resources to fix one of their windows as cardboard is what is covering it but that might just be a temporary fluke I'm willing to ignore.

While the man's parents seem to swim in a sea of expendable income and bizarro art pieces costing anywhere around fourteen thousand American dollars, the son is living in nigh squalid conditions clearly rejecting to enter the 'regular' work force. Yes, he's a college dropout but he does have great promise and is very intelligent. At least, that's what we're told and if you can't trust the storyteller who the heck can you trust, right?

However, Burt's one redeeming quality is that he loves his girlfriend, Verona, who refuses to become his wife even though she loves him with utmost sincerity and is in the relationship for the long haul. Upon finding out that the parents had decided to move to another country, Antwerp, Belgium to be more specific, the expecting couple needs to consider a new place/area as a potential home for the upcoming baby.

And away they go.

They come up with an itinerary to visit various family members and friends who live in places like Phoenix, AZ, Madison, WI, Miami, FL, ah, and Montreal, Quebec.

Let me intimate again that the couple is struggling financially. The woman is an artist apparently but she doesn't seem to be affiliated with anything. They tell us she is talented and we take their word for it. However, we don't quite know how she goes about getting cash for her supposed talent. The man sells some kind of insurance over the phone and apparently all he needs is phone access.
Ok.

The sentiment is indeed noble here. They want to make sure they have a good support system in place for the new addition to the family and they realize that the presence of a healthy network of people is not a luxury, it's a necessity. However, none of people/couples they visit have their kind of special love and strong commitment. You see, I'm willing to overlook the condescension here in hopes that the story redeems itself towards the end.

Sam Mendes seems to come from a good place. He seems to know that in the face of new economic and social hardships a strong support system might just be the ticket to survival. There's nothing wrong with his vision here. It's the execution of said vision that leaves much to be desired.

What is primarily wrong with this film is that it reeks of a kind of self-indulgence that would make Liberace first blush and then weep of public embarrassment.

The couple seems to have this self-righteous air about them, something that says 'we're so much better than all of friends and family members. Our kind of love is so much better. It's better because we're authentic.'

And away go the viewers who leave the theater after having been subjected to yet another nonsensical story about the guilts and complexes of yuppihood.

As a traveler I know a thing or two about the cost of trips, be they small or not so small. My main question at the end of the film was this: Just where do Burt and Verona find all the cash to finance their many trips?
I'm thinking they're hurting for cash since they live in pretty bad conditions. And yet, these thirty-somethings with no clear careers to support them, have enough cash and/or plastic limit to go from AZ to Montreal, rent cars, stay in hotels, buy gifts for people and so forth.

Do movies not hire consultants any more? You know, people who actually know what it's like to live in the real world where bills need to get paid, income needs to get generated, and children cost a whole lot of shekels?

I felt like I was listening to Peggy Noonan's commentary about the economy and life where all of the analogies and metaphors come from the Upper East Side and dinners that Wall Street types frequent. I mean, I respect much of Noonan's writing but sometimes when she speaks I feel like she's coming from a planet alternative to ours. Maybe it's the same place where Sam Mendes resides. I realize this is not a logical digression but I thought I'd go with it.

You see, the story simply doesn't add up. Not in real life, at least.

I don't know in which world Sam Mendes thought this was plausible but it sure isn't the tune we hear in a world circa 2009 where financial consciousness and an overall "editing of one's life" has become the current modus vivendi.

Away We Go is a big bowl of wrong as Jeff Greene would say.
And I had hopes for it. The guy made American Beauty after all. Is he washed up already?

So, should you watch this film?

If your entertainment budget allows for it, then do so by all means. If I were you, I'd spend the money on something far less extravagant and much more useful like, oh, I don't know, iPhone apps.

I've heard mixed reports on this one. I've also rarely read a tougher review on HetPer. I take it you didn't like it?
:)
Jokes aside, I also feel manipulated when I find myself in places where people insist on telling me that 'good art' is about to happen.
Show me your stuff and let me decide if it's something I'd call art. Or, my kind of art at least.
How was the soundtrack?
Any good supporting actors?

Ha!
iPhone apps.
I figured you were going to end on a yuppy note....
I second Sean.
Very ouch. I doubt I'll make time to see it. Have too much of this kind of thing in my own life.....

One of my problems with some forms of indie culture is that it sets itself up on a higher plane than the rest of society.
Oh, we reject this and we reject that. However, how do they actually survive in the world which they apparently reject?
Just where does Burt find the cash to go on all of these soul-searching trips with Verona.
I didn't find the film to be a true-to-life account. Far, very far from it.
The Peggy Noonan went lost on me.....
Context?

Re: Noonan, I read some of her columns and I'd think you'd react more to her than Maureen.
Is it a form-informed contempt? It can't be content.... Not with her at least.