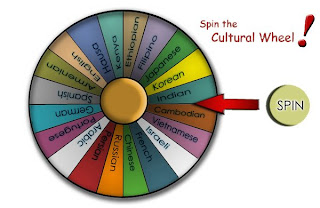 Those of you who travel generously to places where the languages you already speak, are spoken, are bound to have encountered certain lexemes or syntactic structures that are unknown to you. That's the beauty of language, after all. Changes are actuated quickly and language always changes. It's one of the things we can basically always trust in: language changes regardless of our input. I quite like the caprice of language. Since it can get unpredictable, it'll always be interesting. If only more things were as interesting as language, but I digress.

If you ask a Bavarian: "Wie ist es Dir?", s/he will get the point and will most likely say: "Gut, gut, selbe[r]?" While 'Wie ist es Dir?' is quite an old saying, actually it's a modern German rendering of a question that Parzival asks his uncle Anfortas in the medieval narrative Parzival, but again, I digress. I suppose, deep down my desire for context always manages to rear its head somehow. But back to the topic.

If you're a Brit visiting the South of the US, let's say Louisiana, you'll notice that people are fixing to do this and that. No, they're not fixing or repairing things, per se. They're simply getting ready to embark on a task.

I illustrate: "Bobbie Sue, I'm fixing to go over to the mechanic and see about the car." One can imagine how the different layers of meaning can inform one another in a number of ways here.

Having said this, do read Roger Cohen's article on The Times. If you're philology-enamored, you will be entertained.

This article was perhaps the best thing I read today. It's the end of the day and I'm quite knackered myself, [hint: if you don't know this means, read the article!]

"A poet friend, Vincent Katz, was over for dinner the other night and asked me with a twinkle in his eye if I was “knackered.” Katz came to poetry via rock ’n roll, and to Oxford via the University of Chicago, and along the way he picked up some English vernacular.
...
Katz read classics at St. John’s College (viewed as a too-beautiful refuge of sporty underachievers by my own Balliol) and he summed up the experience this way: “I began to realize (what I should have known all along) that I was living in a completely different culture. It was just as alien to me as France would have been, or Spain, or Italy, or Germany. There is the illusion that we speak the same language, but we really don’t.”
Read it all here.

Ha, yes. I read a couple of the British releases from the Harry Potter series, and there were a few instances where I couldn't understand a Britishism, even in context. But I found the British versions more charming, and don't really understand the need to release an American "translation".

I also have a difficult time understanding some British accents. For instance, the movies Billy Elliot, Snatch, and Waking Ned Devine have some thick accents that I have a hard time parsing.

The London dialects are a bit tough to decode. Definitely. Incidentally, Guy Ritchie's films, Lock, Stock, and Two Smoking Barrels as well as Snatch are what my best friend and I 'speak.' Apparently, we have been consistently referred to as Tommy and Turkish since that is the bulk of our inventory. I am resorting to some form of hyperbole here to make the point. We've actually managed to apply much of the 'Ritchie' dialog to most topics we discuss.
And one of the concerns that most of our other friends had with regards to Ritchie's films was that they were simply too hard to understand.
To us, however, it was tip-top. Not all communication is linguistic after all. Paralinguistic communication doesn't get as much aplomb as it needs to. And quite often it helps one 'decode' language.

When watching Snatch or Lock Stock, I frequently have to ask Ian what's going on. His mother is British, so he has an easier time with the dialects than I do. Kudos to you for being able to speak that, let alone understand!

Good one, mate.
So, my first reaction was to say, knackered and knickered, eh?
I thought it was too good to ignore. Or maybe I'm way too hypoglycemic and without food in my stomach yet. After dinner I might just have another idea. :)

You Tommy or Turkish?

That does take gender to another level. Or rather, to the only level you'd find 'apropos' :)
And I seriously need food now.

Ha!
This was priceless!

Sra:
'Turkish' and I, aka, 'Tommy' manage to understand and then speak Lock, Stock, and Snatch thanks to the little thing called captioning. And since we both have similar linguistic inclinations, we sort of went to town with it.
About to go to a movie and I'm a little late. Turkish says, 'chop, chop, Tommy. Before zee Germans get here.'
'Ok, ok. How goes it?
'Right as rain.'
N:
knicker/knacker? I get it. Ha.
I claim Tommy and quite ok with the onomastics.