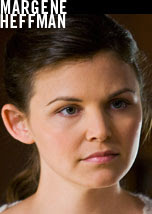 HBO's Big Love is perhaps the queerest show on TV now. The very premise of the show relies on the concept of the margin, actually margins. This show works because underneath its featured confusing relationships it is about one fundamentally relevant concept: human relatability.

The new season started three weeks ago and thanks to OnDemand features I am now updated. The current season is offering new, (even better than before) drama, a contextualized rendering of the polygamy news that resided on the front pages of many US papers this past year, and yes, a new love interest and potential fourth wife, Ana.

Like Stanley Fish, I approve of Big Love. While on the surface it might be about a concept that many find too bizarre to decode, the core of the show is literarily sound, socio-culturally informed, and religiously aware. Big Love attempts to expose the normal (as Nicki calls it) side of polygamy, the side that explores the humanity of a familial system unknown to many of us.

My more detailed, gender theory-informed review of Big Love will appear on an upcoming podcast after my review of Fight of the Conchords. Since both the shows lend themselves to being gendered, it made sense that I develop two podcasts on them. Stay tuned.

For now, here's a solid paragraph from today's post by Stanley Fish. He writes:

"Near the end of the first episode of “Big Love”’s new season, Nicki (Chloe Sevigny), the second of Bill Henrickson’s three wives, stands up on the roof of her house in the middle of a block party. She’s been repairing the roof rather than joining the festivities because she feels unwanted in the neighborhood. But when a couple of the neighbor kids make off with her ladder, she can’t take it anymore and she rises up to say her piece: “All I ever wanted was to be off the compound and live a normal life and be truly free.”

This is an amazing statement. By “normal life” Nicki means a life in a mini-compound (three houses opening up on one backyard) with her husband, her two sister-wives and the eight children Bill has sired. The compound she has fled is led by her patriarch-father, Roman Grant (the great Harry Dean Stanton) and by other male elders who enforce strict obedience to rules they flout and who demand servile fidelity to their every word. (You must be “in harmony with me” is the byword.) "

I was wondering whether you approved of the show. I liked this: 'the side that explores the humanity of a familial system unknown to many of us.'
Looking forward to the podcast.

You privilege the character of Margene, I take it?

You privilege the character of Margene, I take it?

"HBO's Big Love is perhaps the queerest show on TV now."
good opener. will be checking it out. thx.
Big Love is a wonderful show. It's about something so odd and yet it manages to have no affectations. Brill. writing!

And you insomniacs do have it easier. You manage to get your work done and get au currant with the only media that counts. :)

I love Big Love. I first decided to check it out from the library because of the local interest, and a little voyeurism on my part, but I was captivated by the great characters and storylines. I can't wait for season 3 to make dvd!

Nicki is the one I love to hate, as she is so conniving. But every now and then a bit of her humanity comes out, like in one episode where she stood up to Alvie on behalf of her family, I remember being impressed.

The last episode was stupendous!
When Bill sees that he has to stand up to Roman and reveals that decision to Barb, I thought, 'cool, this will be a great season!'
And Barb's sister and her mother.... Having lived out there, it felt as authentic as it be.

It's definitely a good show. Too bad we have to wait till it's out to rent.

What immediately struck me about this show was the narrative that the family is anti-deviant deviants. I'm sucker for irony, so naturally the show had sunk its hooks in me. The trope is dynamic allowing for great flexibilty for all the shows characters. For intance, Roman's son's homosexual activity makes him twice removed from 'normal life'.