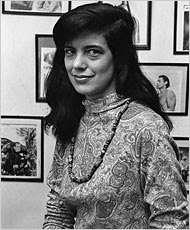 I highly recommend this Times profile on the brilliant Susan Sontag.

"Then Sontag marries. The sequence of events is breathtakingly abrupt. She moves to attend the University of Chicago on a scholarship in the fall of 1949. In November she writes, “A wonderful opportunity was offered me — to do some research work for a soc[iology] instructor named Philip Rieff.” In the next entry, Dec. 2: “I am engaged to Philip Rieff.” A few pages later, after a trip to California to interview Thomas Mann, comes the entry of Jan. 3, 1950: “I marry Philip with full consciousness + fear of my will toward self-destructiveness.” And then she is on to “War and Peace” and Balzac and lists of works on theology. Her decision to marry Rieff is never explained or examined, and in fact she says nothing more about the matter, barring an ambiguous recounted dream, until she begins fulminating against the institution of marriage in 1956. The intervening years barely exist in the journals — five years dissolve in nine pages. The birth of her son in 1952 goes unrecorded; he makes his first appearance in an aside."

Sontag was a powerhouse! Good piece on Times!

She was also A. Leibowotz' partner, ja?

Leibowitz was Sontag's partner till the latter's death.
I see the Selma Blair similarity. I wish I had Sontag's brains, though....

I liked this, '“How to defend the aesthetic experience?” she asks at 16, wanting it to consist of “more than pleasure,” although eight years later, in a rare moment of slippage, she confesses to “a kind of foolish pride which comes from dieting on high culture for too long.”'

Sontag should be mentioned more often as her work and the awareness she raised re: gender and women was not a small matter.

Just recently I was reading up on an A. Leibowitz interview or something and she was very tender and praising of Susan Sontag.