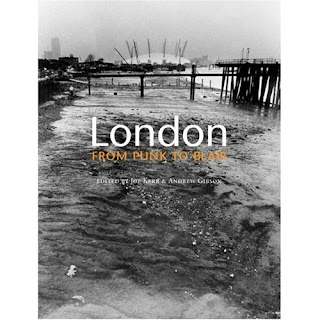 I'm currently working on a modern article on the aesthetics of punk and, in the process, I have encountered some very interesting modern titles.

1) Daniel S. Traber's Whiteness, Otherness, and the Individualism Paradox from Huck to Punk

Traber's work attempts to elucidate such concepts as individualism, marginal identity, and what it means to be 'punk' in the realm of modern Americana. A high point is Chapter Five: "L.A. Punk's Sub-Urbanism," where Traber's discussion of the role of music is, for lack of a better term, attention-grabbing. A good line says:

"Music can open sites for people to negotiate their historical, social, and emotional relations to the world" (115). And that line was as good as any to hook a long attention span from me.

This book is a non-stop visual and lexical fest!

If punk culture and text were ever concepts you wished to explore, this 2003 edition would be a good Virgil to you. A solid line from the chapter: "Altering Images" says:

"The period that runs from Punk to Blair has been boom-time for - not to say the fetishization of - the London writer" (292).

Are you going to post your findings on the blog or will we look at it when it's in print? Since we line in an ADD culture, I hope you make mention of your progress from time to time. The London book looks interesting!

Done and done. Paging the Library ...

The second title sounds especially interesting. I've been wanting to have a good title that chronicles the punk movement in the UK.

I'd like to read the article when done. Please?

what informs your interest in punk culture? if i could also read the article, i'd be happy....

also, what about punk culture in the continent?

Dibs on the final piece?