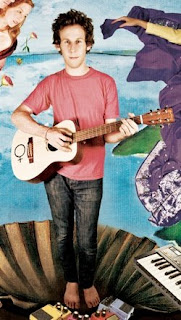 If you are Ben Lee fans, the following interview as featured on Black Book Magazine, will be of interest to you. The main reason why I like Ben Lee is because of his musical and cultural references. I see him as a dictionary to other performers, i.e., in a way he allows other Indie rockers make sense. More specifically, he is a good example of an artist I like because of what he makes me think of and not necessarily because of what he actually does.

The Australian Indie rocker is, no doubt, talented and aesthetically unique but I do admit to only listening to his music when not working intensely on things. Ben Lee is a good choice when some R and R is on the docket. To me, at least.
But I want to like him more. More actively, that is, and that's why I will make sure to 'read' closely his new album The Rebirth of Venus. His latest project promises to be especially gendered and that is yet another reason to invest more time in the performer and his art.

A bit from the interview says:

"If you’re a solo artist, the collaborations are really what inspire. Like next week, I’m about to go sing with Margaret Cho. I feel like in a way, I like to return to the attitude of the beginner. I want to learn. Collaborations really allow me to do that.

[With Kylie], I’ve never really worked with someone who really, quite proudly called themselves a pop artist, someone who didn’t have the pretenses of being a songwriter, but is a great singer and a great entertainer. What Kylie is is kind of like what Frank Sinatra is. She’s a classic, old-fashioned entertainer. It opened me up to parts of myself that I haven’t let myself experience – which is a love with old-fashioned entertainment. Like, you know, you gotta go on with the show. There’s something very appealing about the attitude for me that I never understood— until I met Kylie. "
Read more here.

I also see him as a cool number to have on the iPod just because.... He is talented, no doubt.

I also see him as a cool number to have on the iPod just because.... He is talented, no doubt.

What do you mean by this,
'I see him as a dictionary to other performers, i.e., in a way he allows other Indie rockers make sense. '

What do you mean by this,
'I see him as a dictionary to other performers, i.e., in a way he allows other Indie rockers make sense. '

His presentation is so awkward, it's likable. And I like his sound too. They say he's good live. Ever seen?

he's so odd-looking but very cool-sounding.