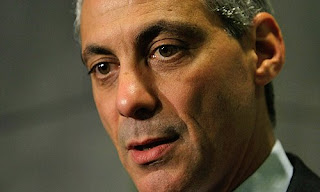 Rahm Emanuel has a very impressive resume.
He is also the man Obama wants as his chief of staff.
Emanuel is on all the papers this mornings. Most cable political commentary cable shows are talking about the Illinois congressman as well. What I find interesting, however, is that, quite often, some commentators mention his connection to ballet.
Apparently, Emanuel is starkly intensive and very tough. After mentioning these things about his nature, many are also saying that he was trained to be a ballet dancer and that he was offered a scholarship to the reputable Joffrey Ballet. Emanuel ended up attending Sarah Lawrence College which is also well-known for its strong Dance Program.

Here are some articles about Rahm Emanuel who apparently is so tough many would refer to him as Rahmbo.
LA Times reports:
"Along the way, Emanuel earned a reputation for a colorful intensity unusual even in the hard-hitting world of politics. His profanity is legendary and seems designed in part to throw his interlocutors off-balance.
Emanuel excelled at fundraising, sometimes screaming and shouting at donors until they agreed to contribute -- generously -- to his candidate. He threatened to tear up checks if he considered them too small.
"Congressional Republicans respect what he has been able to do," Feehery said. "They think he's a formidable opponent. They think he works his butt off. They won't particularly love him, but if he's smart, they will respect him.""

The full article is here.

The NY Times has another here. A bit says:
"He earned the nickname Rahmbo for his determination and take-no-prisoners approach — an advantage when trying to bring a thorny issue to resolution, but a style that can be off-putting to those accustomed to gentility. Mr. Obama might also decide to keep Mr. Emanuel on Capitol Hill to protect his flank, and the Democratic House majority. Should he resign his seat, Mr. Emanuel would be relinquishing a promising House career and aspirations to become speaker."
graph per la times
Posted by B.R. at 10:43 AM

I noticed that, too. The pundit I was listening to said, 'oh, and he's a ballet dancer.'

I guess they mention ballet because there aren't many politicians out there who're actually trained in it.
Oh, did you know that his brother, Ari, is supposedly who Entourage's Ari is based on.....

I wish there wouldn't be odd prejudice against boys taking ballet. It's a beautiful activity and art form. Good for him! It's great to see how things shift culturally.

Just read this on the Times:
"A student of ballet, Rahm Emanuel has shown a flair for theatrics over his years as a Democratic operative. His fancy dancing has been anything but delicate, however."
Full article here:
http://www.nytimes.com/aponline/washington/AP-Emanuel-Profile.html

Well, the guy needs to get the job done for which he was hired. Getting the best possible staff is the way to go about a successful administration.
I have noticed the ballet mentions too. Cool. The guy was trained in ballet. Even better. He gets the arts. More people should!