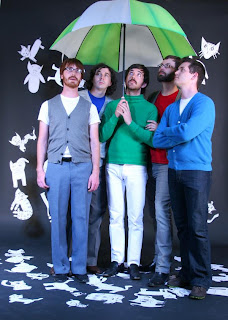 No travel is complete sans new music. To me, at least. So, in true fashion, I have been surrounded by new sounds lately. Coldplay's new album was a welcome addition to my playlist for roadtripping purposes. Rilo Kiley and She Wants Revenge have been used much as well. However, recently I had been needing a kind of music that would allow me to adequately fill my creative time and space. I have been needing a kind of music that speaks to people who have a tendency to wake up most mornings enveloped by a mixture of recent losses and current gains. Try explaining this to a record store owner in Minneapolis when searching for new beats, but I digress.
Anyway.
I need a special kind of music to write to. It needs to be mellow yet daring, soulful yet sharp, well-paced yet moderate. In short, it needs to be a kind that begs for attention. Calico's new album Blackpyramid does exactly that.
I took a break from the family visit and travel today to write a little bit. I did so to Blackpyramid. I created a whole new page. To Blackpyramid. And that's how a new album passes my test: if it fuels my own creativity, it passes with flying colors.
Well, that, plus it fuels my own sense of pride in a job well done. My friend's. Liam B. Hesselbein is a member of Calico and that's reason enough for me to check anything out that he's helped create. Liam gets indie. And he gets 'cool.' Hence, whatever he makes I am inclined to enjoy. De gustibus non discutandum est. Period.
Now, how can I describe Blackpyramid?
Well, I'll try to use the same words I had circulating in my head when I first heard their tracks "Diamond" and "Hands are Sand." It's the kind of music that involves the senses in an unapologetic way. This is not the kind of music to listen to when attempting to fill the external noise in a cafe in a foreign land or when drowning the unbearable silence in familiar territories. No, this is a sound that begs for one's full attention. It's a sound that transports. It successfully seals one in a well-isolated space wherein introspection can be performed peacefully and no one will access your realm without permission.
Then, there is "Heaven." Even Beatrice would walk to its sound. I stand by this.
Much could be said about this album, for like their track "Teeth in the Fire" it evokes a sense of perpetual expression. And which member of the creative class would say 'no' to such an effect?
Dickens perhaps, but only if he had stopped getting paid by the word as the myth has it.
Blackpyramid delivers. Get it. It won't disappoint. It will inspire.
graph per myspace
Posted by B.R. at 1:06 PM

i'll def give this a listen. thx.

If it really does this: "This is not the kind of music to listen to when attempting to fill the external noise in a cafe in a foreign land or when drowning the unbearable silence in familiar territories.".... I am SO getting it!!!

I'm so needing to be into something that would do this:
"It successfully seals one in a well-isolated space wherein introspection can be performed peacefully and no one will access your realm without permission."

I dig the pic. This could so hang on some cafe wall. Like the Kafe Kerouac in the neighborhood, no?