What Does 'Hot' Mean? 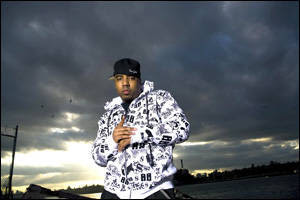 One of the things I especially love about traveling is talking to my pop culture people who always manage to inform me about much of much.
So, here's one. It's an article on the notion of hotness and what it entails. It's also about rap music.
My parents asked me what the contextual meaning of the term of 'hot' was and all I could say was, 'well, it's something really neat and great, like if you see something you react to positively, or if you want to emulate that which you see, or if something is really aesthetically appealing, and so forth. Well, at least that's how I us it.'
'Hot' does not only apply to people or anthropomorphized things. It may apply to the weather too. Hold on. I suppose, originally, like decades ago and such, 'hot' was used quite often to refer to the weather or high temperatures for the most part, but I digress.
Cheekiness aside, the semantic extension that the word has undergone reveals much about our modern linguistic habits. I find it rather curious that one of the words we use to refer to positive, aesthetically pleasing and beautiful things and so forth is a simple three-lettered word. Hmm.
Anyway, this post is written while en route so it is bound to be full of non sequiturs. The aforementioned article had something very interesting to say about the term 'hot.' It is perhaps the 'coolest' thing I've read in days.
I simply had to include most of it and you will see why after you are done reading it. Alas, the graphs were not uploaded so I would highly recommend that you go to the source itself and see them. Here comes much of it:

'This is why "This Is Why I'm Hot" is hot: Because it's hot. There are of course other reasons the breakout single from Mims, a Washington Heights rapper who intends to carry New York hip-hop on his back and restore us to glory, is hot. It ascended to number one on Billboard's Hot 100, for example, and topped iTunes' singles chart as well. But consider these other, purer, more intangible reasons why it's hot, best explained by Mims himself over the course of the song. Where appropriate, we will back him up with visual aids.

Mims is hot because he's fly. But it raises the question: Does being hot guarantee one's being fly? "You ain't 'cause you not" would seem to clear that up:

It would appear that fly and hot are interchangable. If you are one, you are both; if you aren't at least one, you are neither.

...
The other remarkable, oft-quoted line in "This Is Why I'm Hot" is "I could sell a mil' sayin' nothin' on a track." Critics gibe that "This Is Why I'm Hot" proves precisely that; others muse on what Mims would sell if he deigned to actually say something on a track. Would he sell less than a mil'? Exactly a mil', as when he said nothing? Or a great deal more than a mil'? The song does not elaborate.

In any event, note that he can do those things, not will, which suggests he might not. As these claims and predictions are speculative, there are more possible outcomes; it seems reasonable to assert that Mims can't sell more than a mil' sayin' nothin'. Though we would love to see him try.
Sonically, the most entertaining part of "This Is Why I'm Hot" is the first verse, in which Mims underscores his hotness by touting his skill at adapting to regional styles, as the slow, minimal, eerie beat morphs beneath him, sampling both "Nuthin' But a G Thang" and "Jesus Walks." In the Dirty Dirty (South) he makes the ladies bounce. He slows it down in the Midwest per their preference. He does it the Cali way in L.A., and in Chi, in addition to adeptly moving the crowds from side to side, everyone loves his fashion sense. (If you enjoy nothing else about "This Is Why I'm Hot," acknowledge the rakish, immensely appealing way Mims says the word attire.)

Our quarrel lies with "If you need it hyphy/I take it to the Bay," an homage to the Oakland–San Francisco Bay Area's relentlessly knuckleheaded and sorta wonderful hyphy movement, with its proclivities for going dumb, making thizz faces, ghost-riding the whip, etc. (Yahdidabooboo.) But unlike Mims's other geographical shout-outs, that's all he says here—"I take it to the Bay/'Frisco to Sac-town/They do it e'y'day." First of all, no one calls it "Frisco" except rhyme-starved rappers, and the only worthwhile MCs living anywhere near Sacramento are in prison. But even worse, there's no style adjustment here—he just takes it to the Bay. This is wholly insufficient for hotness—several entities that take it to the Bay do not qualify:
The song's other two verses are a relative letdown—Mims can get chopped birds by the flock, he's got money in the bag, he coordinates his outfits, he compels you to Google the word guap, people tend to like how he records, he's into big spendin', bah. He does intimate that we will find him "with different women" that we personally have "never had," which is awfully gentlemanly of him, really. Since we're feeling charitable we'll assume all of Mims's women are hot; with regard to our own conquests, it's best to be honest with ourselves.

Though a fantastic song, "This Is Why I'm Hot" verily reeks of Skee-Lo. It's so distinctive and goofy that no follow-up could possibly do it justice. But even if Mims is not built for endurance, he has given us an invaluable gift nonetheless—reclaiming and re-energizing the word hot after years of abuse. Plumbing one's memory (with a bit of Internet aid) reveals how even reputable musicians have overused the "I'm hot like _____" construction. Behold:

Yes. Mere mortals are hot like other people or things; having ascended to a higher plane, Mims is hot like Mims. It doesn't get hotter than that.'

Ha. This is just too funny. "This is why I'm hot" is another example to use when attempting a 'reading' of our basic narcissism, no?

is it just me or isn't this conflated sense of self a-la- Kanye West oh-so-2006?

I am so using this "This is wholly insufficient for hotness." Ha. What a great line. And to think I could have used it the other day? How are your travels?