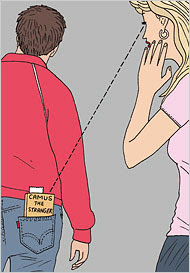 Gripping piece per NY Times.
"Some years ago, I was awakened early one morning by a phone call from a friend. She had just broken up with a boyfriend she still loved and was desperate to justify her decision. “Can you believe it!” she shouted into the phone. “He hadn’t even heard of Pushkin!”

We’ve all been there. Or some of us have. Anyone who cares about books has at some point confronted the Pushkin problem: when a missed — or misguided — literary reference makes it chillingly clear that a romance is going nowhere fast. At least since Dante’s Paolo and Francesca fell in love over tales of Lancelot, literary taste has been a good shorthand for gauging compatibility. These days, thanks to social networking sites like Facebook and MySpace, listing your favorite books and authors is a crucial, if risky, part of self-branding.'

On some level, I do agree with the premise of the article. However, I don't find reality, my reality at least, to be that black and white. Back in college, a boyfriend of mine didn't know who Goethe was. But then again, he was aesthetically superior and there went my literary judgment. 'There's always time for Goethe later on,' I reasoned. Dumping someone because of their lack of literary understanding doesn't sound too mature or human, for that matter. But, like the author of the piece, I have heard people in my circle say things like, "well, can you blame me, she hasn't read a book since Madonna's Ray of Light. Hello!!!'

Here's another interesting/funny snippet from the article,
"Let’s face it — this may be a gender issue. Brainy women are probably more sensitive to literary deal breakers than are brainy men. (Rare is the guy who’d throw a pretty girl out of bed for revealing her imperfect taste in books.) After all, women read more, especially when it comes to fiction. “It’s really great if you find a guy that reads, period,” said Beverly West, an author of “Bibliotherapy: The Girl’s Guide to Books for Every Phase of Our Lives.” Jessa Crispin, a blogger at the literary site Bookslut.com, agrees. “Most of my friends and men in my life are nonreaders,” she said, but “now that you mention it, if I went over to a man’s house and there were those books about life’s lessons learned from dogs, I would probably keep my clothes on.”
Read full text here.

In my days of 'dalliance' i felt threatened by the other person's expansive literary knowledge.
The reason I gave my folks re the breakup was, 'she jut read too much.' I'm sure I'll get a scolding text now....

Self-help books do it for me. If I see oodles of them around, I jet.

there will always be variation in the amount two people read. walt whitman's wife was illiterate iirc.

I once ended a first date when the guy tried to pass off a famous e.e. cummings poem as one he had written "just for me." The real silliness of it was, had he read it straight from the book, I might have melted. Does this count?

well, this girl told me that she read self-help books. needless to say, i didn't call her back.... that count?

Back in my days of immaturity, I broke up with someone whose library consisted of US magazines.
Come to think of, I'd do the same in my days of 'maturity.'