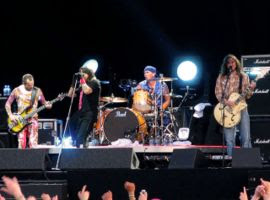 When I first started watching the show, I was reminded of the Peppers' project by the same title which came out in 1999.

Now, since the Peppers' album came out in 1999 and the Duchovny show was produced and aired in 2007 one could perhaps assume that the first user of the term needs to be the 'sole' user. At least, that's how I'm understanding the Peppers' current annoyance over the use of 'californication.'

At the same time, however, the rock band was not the first one to use the term "Californication."

As per the show's executive producing team, there used to be bumper stickers in the '70's with the logo 'Don't Californicate Oregon,' because Californians were moving up North to Oregon.

Ergo, there is pre-Peppers use of the lexeme.

Let's see how the judge will settle this one.

but RHCP sort of popularized the term though.....

i read that they also demand money from Showtime and an immediate change of their show's name.

if you ask me, i say LAME-O! hit the studio and make more albums, Red Peppers!!

Right. On top of monetary restitution, the Peppers have asked that Showtime come up with a different name for the show. Incidentally, the show is scheduled for a second season.