On Intimacy and Master & Commander 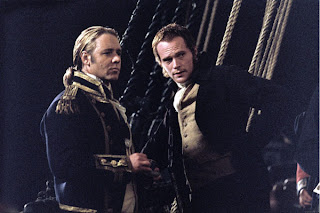 I was talking to someone I've just met and, for a moment, I felt like I was talking to one of my dearest, longest friends. I was in the driver's seat and I decided to explore why I was feeling so tripped out by this realization until after I had exited the freeway. Maybe, it was the influence of a previous conversation I'd had earlier in the day with my best friend. Maybe it was just that I recognized something familiar in the speech patterns of the interlocutor. I'm betting on the latter.

For the linguistically minded, speech familiarity is a matter of intimacy. Hence, it cannot be taken lightly. I sure know better than to do so. Neglecting it is like neglecting a bad migraine. It won't just go away. Ok, at times it might but I'm not so keen on testing the odds.

So, there I was, surrounded by high peaks, the smell of the ocean, and the speech patterns of a relative stranger who speaks the way I tend to speak with my seasoned friends and close relationships. When the other party asks me if we know some of the same people, I answered with confidence and/or arrogance (I'm open to the possibility that it might have been the latter), "yeah, it's highly unlikely that we do. But I guess we might navigate towards those who speak the way we do and read what we do and watch what we do. Did you ever watch/like Master and Commander, by any chance?"

It was a surprise to me that the answer was 'no.' It's not every day that I experience that kind of affinity. Well, unless I'm speaking to my carefully selected friends and we've been having the same experiences either together or while engaged in separate togetherness.

Subsequently, I did what I tend to do best. I waxed philosophical on the merits of Master and Commander and how it captures and then deconstructs masculinity better than anything I can think of. And I'm still a bit tripped out by the fact that I seemed to have so much in common with someone who, on the surface, is so different from me and comes from such a vastly different way of life. But then again I know better than not to acknowledge the fact that language is indeed one tricky rascal.

Labels: anecdotes re: daily like, culture and language, daily life, language use, Master and Commander

This slice of quotidianity gave me some food for thought....
What we expose ourselves culturally has much to do with how we view the menial dailies, no doubt, which is what makes other points of connection with others who don't always share the same frames of references so bizarrely special. It does make one wonder about true connectivity and what allows it to be, right?

Master and Commander is one of those films that I thought would bore me. It's so thick and rich, however. I kept thinking Lawrence of Arabia when watching it but, in retrospect, I did so because it's also an all-men cast.
Great picture!

Yup. The reading list is necessary to have a chance with BR. :)

Btw, jokes aside, of course language is never inconsequential. How, and most importantly, with reference to what we speak, reveals much about what we're all about. Hence, my reading list comment....
We're liking the Northwest, ja?

I have noticed that when you hang around the same people a lot, you adopt some of their linguistic traits, and they yours. So it makes sense to ask if you know the same people, methinks.