As I was reading the news this morning I noticed a piece on NPR on Tilda Swinton's new feature I Am Love and it prompted me to think two things: 1) this is exactly the kind of film I would like to see now and 2) Swinton is so fabulously talented, Orlando anyone?

I cannot think of many artists who can transform themselves with as much seeming ease as Swinton. In Virgina Woolf's-informed Orlando, she plays a man who transforms over the course of time into a woman and the audience almost forgets that it's not simply viewing a feature film but that it's absorbing Woolf's lengthy novel, instead. She goes from portraying a working suburban mom in Thumbsucker to a mysterious character in The Limits of Control with a kind of ease that is bound to mesmerize one.

Swinton is the kind of talent that is strong enough to save less-than-mediocre and mediocre films. Films like The Beach, Constantine, and Burn After Reading were a let-down overall but the bits that feature Swinton make one forget the overall disappointment of the piece. And that is what a talented performer can do.

A bit from the recent NPR profile of Swinton reads: "For me," she says, "transformation is inevitable. That's what I find really fascinating about life, and I have since I was really very small. And I'm always interested when people fantasize that they can deny that it exists, or that they can have any control over it, or that change might be a choice. Change is the only thing we have, it seems to me, and it's with us all the time."

If you have not seen many of her features, I recommend that you visit her filmography at some point in time. You won't be disappointed. Below, see some of the many faces of Swinton's characters. 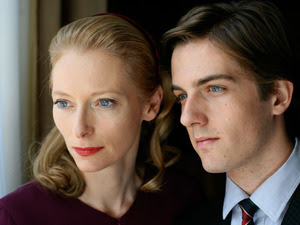 I thought about seeing I Am Love because Swinton is in it, but the synopsis still gives me pause. I'm waiting for a reliable review before bothering. But I think she is fabulous in Orlando.

I have a hard time getting into Orlando but that's because Virginia Woolf's such a downer. I do like Swinton, however.