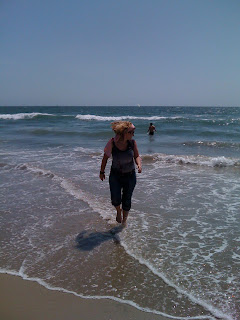 Every time I go to LA, I notice that there is a marked difference in my pace and my re-discovery slowness. I reckon it's the beach. I rarely do anything slowly as that is a speed I don't get naturally. When I'm out West, however, it makes organic sense for me to, as they say, 'chill out.'

This time around my friend and I had one main purpose and that was to try and experience the quintessential LA as much as possible. Our experience was kind of a-la Steve Martin the way he tells it in LA Story and Shopgirl . Every time I'm in LA, however, I forget how stressful it is to deal with the traffic and the uber-intricate highway system but that's really small potatoes compared to the moments of quietude I feel when I see all the palm trees. Driving and traffic is a pain but the fun that is had in-between far outweighs that. So, it's all good, as I like to say. 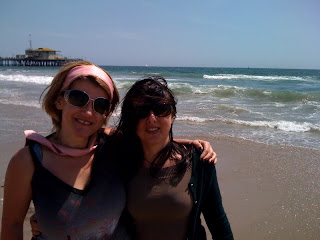 Some of the places that always stand out to me are the hang-outs on Montana Rd. out in Santa Monica. Montana is a beautiful road with tons of energy and pleasing aesthetics. One of the places I like to make time for when I visit is the Blue Plate. What I like about the Blue Plate is that it embodies what I equate with California-type vibes, i.e., it's relaxed and casual but in an elegant and earthy sort of way.

Another favorite thing to do when in LA is drive down on Sunset starting at the Coffee Bean location on 7915 W Sunset Blvd. This particular location is what I would call 'hipster central'. I am amused by the mixing of the 'entertainer and creative class' with the civilians. Every time I find myself ordering a Chai Latte which proves to be the right beverage for the drive all the way down to the Palisades. And what's great about this experience is that it leads me to the beach every single time. Incidentally, we did see Zach Braff order his drink right before we ordered ours. One thing about him: the camera doesn't really do justice to his face as he is far better-looking in person.

The road on Sunset meanders and it's reminiscent of the Riviera. A definite must, if you're ever in that neck of the woods. I find it curious that I feel the same way every time I drive the same distance. I cannot really say the same thing for much else.

This time around the trip had many exquisite highlights one of which was seeing Bill Maher live. We were very lucky in that we managed to get two tickets for Real Time with Bill Maher. I called the moment my friend informed me of there being some free tickets up for grabs. I was surprised to get a phone call back from the show and I was very excited to secure tickets for us as my friend is a big fan of the show as well. So, we get to the CBS studios on Beverly and Fairfax last Friday around 5:30pm Pacific Time and the show was on live at 7:00pm. It was quite a thing to be there live. We were sitting in the second row and Bill Maher, Salman Rushdie, Sarah Silverman and guests were right there. As a fan of Maher's show I find myself trying to catch it live every week when it's in season. Seeing it live, however, added another awesome dimension to it.

We were incredulous over the fact that time flew by unnaturally quickly. The one-hour long show seemed to last a mere 5 minutes. It was exhilarating to be there and if you ever manage to be as lucky as we were and get tickets, do go. It will enrich your California experience for sure. One thing I was looking forward to getting was Maher's autograph. I don't really care for autographs in general but if it's people I admire and read and watch, I do try to be prepared to get their respective autographs as a way of remembering the experience. In addition, we couldn't bring cameras or camera phones into the studio. Yet, somehow I didn't mind that I'd be divorced from my iPhone for an hour. I usually hyperventilate at the thought. Not this time, though.

We added to the list of our indie experiences by stopping at the world's biggest indie record store out in Sunset Blvd, i.e., the very awesome Amoeba Music. I love visiting record stores. On some of my trips I've mostly done record store visiting as during such times I come across some new music info and I am a junkie for music, after all, so it's apropos. This time we stopped and took some pictures of unusual CD covers and older LP's. The collection of music in this place is simply stupendous.

If you like music, you will need to make some time for this store and for the many indie hangouts on Sunset Blvd. The experience won't disappoint.

We had plenty of great culinary experiences in LA but one of the best ones would have to be the one at Kitchen 24 over in Hollywood. The atmosphere inside the place is quintessentially indie. And my Hash Brown Salmon Florentine is a dish worth a mention and a big tip of my hat. 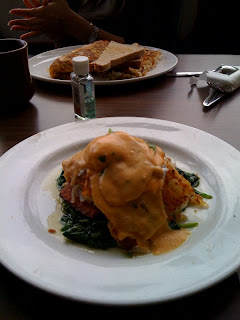 And then, of course, there's the beach and that's always the same: awesome! And judging by my foot in this picture, it seems to concur with the rest of me. 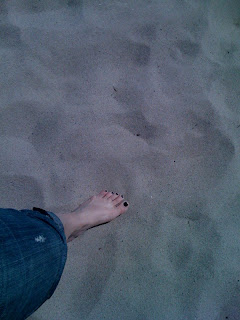 Ah, and of course, it would not be LA without a bit of this: 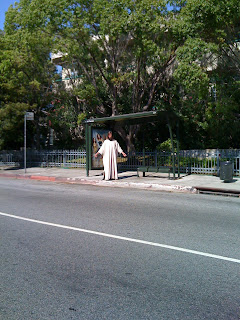 Ah, driving in LA is insanity! I also forget how crazy it is. But it does have so much diversity, too. I need to get to Amoeba Music. Did you eat at Boho, btw?

Ok, the Jesus at the bus stop is genius!!

And that Jesus picture?
Precious! Where was it?

Agreed on the traffic comment. It's a total zoo out there. What do they say, if you can drive there, you can drive anywhere? The beach is so awesome over there, though. Did you make it out to Malibu or did you mostly stay LA-bound?

-Ok, you actually got to see Bill Maher live? NICE! Those tickets are hard to come y so, right on!

Real Time with Bill MAher live?! Right on, B.R.! I agree with the others. The Jesus pic is a find!!

What's on the CD cover, Bri?
The Jesus pic deserves to be framed. What part of LA was it?

-No, didn't eat at Boho's as we dined at Kitchen 24 on that day. We went to Amoeba, however, which is right next to Boho's.
-We drove past there but mostly stayed LA-bound.
-The Bill Maher experience was definitely worth the trip. Amazing!!
-The Jesus pic was somewhere out in Santa Monica. The guy was crossing the street as we were waiting for the light to turn green. It was kind a thing to see that guy walk the way he did.
-Good one, Sra.
-The cover was of some humor-informed corpulence.