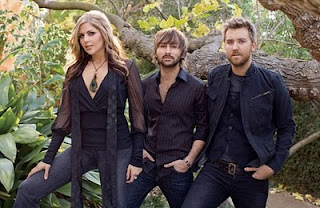 I was recently reading an article on the NY Times which discussed a new David Mamet play called Race. Something I tend to do and of which I'm not always aware is tracing the origin of my interests. For example, I know when I started to get into the habit of tracing word etymologies, when and where I first met the most significant people in my life, when I started to think that Modest Mouse in a way brought indie rock to the forefront, where I was when I 'got' what it meant to want to be surrounded by artists who produce my kind of art and aesthetics, why I always insist on playing Muse's "Map of the Problematique" when I'm on road trips, how eyeliners manage to somehow bring a level of sophistication to one's aesthetic presentation, and so forth.

The other day I was doing my laps at the pool and I had a song by Lady Antebellum stuck in my head. I've long gotten accustomed to the fact that I tend to have a song/melody in my head at any given point in time. Instead of trying to make sense of the origin of these audio habit, I've learned to accept them as they are. Currently, audio habits change monthly it seems like. As I was swimming, I got some water in my mouth which is something that vexes me terribly. However, what truly proved to be vexing this time was the fact that I got water in my mouth while doing a back stroke.

As I was about to reach the end of the pool, I started to do what I tend to do while on dry land: whistle. That mannerism doesn't quite translate well in the water, however. Since I do most of my better thinking while moving i.e., "agito ergo sum," I figured I could try to understand why I was whistling to a track by Lady Antebellum called Need You Now.

Lady Antebellum are a new 'country' band. I don't do country music. As it can be clearly gleaned from this blog of mine I have other kinds of favorites. We're all entitled to favorites, after all. Ergo, I wondered why I was wanting to whistle to the music of Lady Antebellum. One thing I know about my likes/dislikes is that I can logically explain why they are a like/dislike. I am of the opinion that what we like reveals much about who we are. Ergo, likes/dislikes are never inconsequential. Not to me, at least.

So, why whistle to their tune? Well, I think I know why I wanted to whistle their tune. As much as they self-define as 'country' they're mostly rock. As a matter of fact, what I truly like about the track is the guitar solo around minute 2'50. And as it is the case with many other things, aesthetics plays a major role here as well. I like Charles Kelly's style and text of presentation. Still, this is not the kind of music I am inclined to react to positively as I don't give it much attention in my daily routine.

Some things of transient value need to be in the forefront too. Ever so briefly, though. Its kind of like my interest in skinny jeans. They're a good addition to the wardrobe. To a small degree and in moderation, however. Use them with more frequency and they will manage to do nothing more than bring a level of banality to one's closet. This is a textile truth I am true to, at this point. As I was completing my laps I kept thinking of some of my other high-frequency interests and at that point I found myself thinking about the many long discussions I regularly have with one of my closest pals.

More specifically, he called me up the other day to ask me specifically if I've ever had a desire to 'imitate' any of the interests of the people closest to me. I thought of the current high-frequency interests and most of them stem from similar sources and experiences. Rarely, however, do they stem from people. From a person or two, of course, but they mostly originate from shared experiences with those who share my basic aesthetic tendencies.

A, for the most part, egalitarian social connection is one that is built on reciprocity. It is not enough to be around those who 'get' your frames of references. It is rather more important and self-supporting to rely on the influences of those few who not only read and 'get' your references well but who also contribute new things worthy of your pursuit.

I think of my significant ones who 'get' these same references or, more importantly and specifically to this post, who I did these things with first, and my friend's question is answered fully. Some desires and interests have the longevity of a high-frequency country song a-la-rock. It's fine for a day or two but at the end of the time frame, you know you can only get your true protein from the interests that stand the test of time. And a good test of solid and healthy sociality is one that relates to longevity. Some interests reside in the territory of appetizers, ahem, Lady Antebellum, and others actually give you protein. And as most things of true value, they reside in the safe space of one's private space.

Agreed. I do dig Charles Kelly, too. It is funny how country music 'bothers' you when you're swimming. Ha. Classic! "I move therefore I am", does make much sense in this context, however.

Agreed. I do dig Charles Kelly, too. It is funny how country music 'bothers' you when you're swimming. Ha. Classic! "I move therefore I am", does make much sense in this context, however.

Charles Kelly is cool, agreed. Ha. Classic! It is pretty funny how country music 'bothers' you when you're doing your laps at the pool. Awesome!

What music is purely influence-driven?

Ha. L. Antebellum? Priceless.... That one song is pretty cool, though.

I dig this movement-generated experiences. Nice. I can see why Lady Antebellum can be easily whistlable. :)