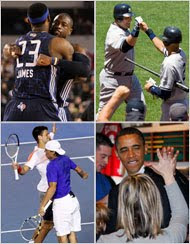 1) Is "Cellar door" the most beautiful phrase in the English language? More here. Tip of the hat to MR for the pointer.

2) Good article about the psychological effects of touching on the NY Times. A bit says: "“We think that humans build relationships precisely for this reason, to distribute problem solving across brains,” said James A. Coan, a a psychologist at the University of Virginia. “We are wired to literally share the processing load, and this is the signal we’re getting when we receive support through touch.” More here.

4) I agree, for the most part, with NY Times' Charles M. Blow's take on the film Precious and Tyler Perry's bizarre fascination with problematic female characters. I find Tyler Perry's films too cliché-rich and a bit too self-mythologizing generally. Hence, when I read this NY Times bit on the Oscars and the generously nominated Lee Daniels' film Precious, I found myself agreeing with the premise almost fully. A bit says:

"Then came Tyler Perry with his inexplicable fascination with this cliché, and his almost single-handed revival of it.

In the last five years, he has featured a crack-addicted black mother who leaves her children in two of his films and on his very popular sitcom, “House of Payne.” (In one of the films, the character is referred to but never seen.) In another film, a main character is a drug-addicted prostitute. And in yet another, a mother leaves her family for the drug dealer.

It should be noted that “Precious” is “co-presented” by Perry.

Let it go, Mr. Perry. These never-ending portrayals perpetuate the modern mythology that little has changed when much has. Even for Whitney."

I second the sentiment. Exactly, Mr. Perry, let it go. Hire some good writers and come up with new story lines. And, could an actual female actor play your Madea character instead of you? I mean, we are way past Shakespearean times. Women may play female characters on the stage nowadays.

The Times article sounds interesting. I think I did better in school when my folks hugged me more. Or something. This thing only works if it comes from welcome sources, however. I can't stand it when people I don't know well touch/hug.

Yeah, I don't have an interest in seeing Precious. I like Mo'nique better when she does comedy, anyway.