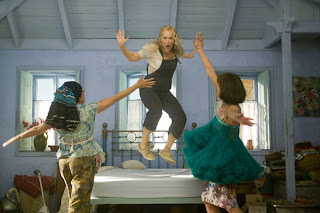 Abba taught me a lesson this week.
Last summer my niece who lives in Munich came to spend her summer in Ohio. We had a good time and rarely did the same thing twice as I wanted her to experience as many things as possible. She did experience one thing twice however, and that was watching the ’08 film Mamma Mia. Yes, HetPer readers, I actually went to see Mamma Mia voluntarily and more than once. My niece loved it so much that I could read her usually economical speech patterns accurately enough to see that she could have (and would have) seen it twice or more. And what’s even more unusual, I sort of, kind of, didn’t mind it terribly watching it a second time. Yes, I emailed and texted (we were sitting in the back and nobody seemed bothered by the light on the gadget, btw) while the movie was playing but I did notice my right foot taking a life of its own as it was publicly and freely jamming to the soundtrack.

On top of the film, we would play the soundtrack of Mamma Mia when driving to different places. Not only did we play the soundtrack to the Hollywood production by the same title, we also played Abba’s Greatest Hits and one track kept getting played in random play. It was "The Winner Takes It All" and I am told I know all the words to it. Yes, all. No, there is no chance I will openly admit to this as I really don’t care much for Abba sounds. I’m Indie, for crying outloud. Totally and thoroughly. Or, am I? Existentialism aside, I did take a few moments to asses my odd relationship to Abba's music and I think I finally pinpointed the reason why I sort of, kind of don't mind them. The origin of this odd reaction seems to be residing in this memory I have of my sister, the niece’s mother, of whom I used to be in such awe as she is almost a decade my senior and oh-so-smart! All of a sudden, it made sense to me why I’d find Abba’s music not only kind of, sort of kosher but totally ok. She liked them when she was a teenager and I but an eight-year-old monkey. Which meant, I liked them, too.

Granted, this outs me as a listener of Abba. And I don’t mind the appellation at all as I can pin it all on an awfully hot summer, the colorful task of being a host to a teenager and the uber-powerful role of the subconscious. And can one of us resist it? Ha. As if!

Another reason why I'm discussing this is because of a conversation I had recently with someone who asked me what I currently have on my iPod. My answer to the question was, “well, do you expect me to reveal the answer without a Macchiato first?”
After the joke (i.e., truth), I proceeded to revealing the full contents of my high-frequency playlist. In addition to the staple, i.e., Muse’s The Resistance, Keane’s Perfect Symmetry, Mandalay, Postal Service, Death Cab for Cutie, some Morrissey and The Sounds, and Mozart's Requiem, I had an Abba song. Not a Mamma Mia (2008) song, no. An actual Abba song. The song was "Dancing Queen." I have no actual idea how that track ended up in my playlist. The best I can do is to say that perhaps it was placed on my iPod just to make me laugh (or perhaps fall off my Ventura so that I’d have a reason for said ‘fall’) whichever came first and was funnier.
As I was descending from a hill-like area, I remember thinking to myself that the cars were going by a tad too fast right next to me and that I would have absolutely hated it if the following conversation was actually had in reality:
“So, B.R., what were you listening to when it happened?”
“Hmm, you know.”
“No, I don’t. What?”
“Abba’s "Dancing Queen", ok. Abba’s friggin’ “Dancing Queen”. Jeez!” It actually happened when Abba breaks into "you can dance, you can ji-ive, having the time of your life,…’ and then, pooof, I fell. Postal Service’s “Sleeping In” was right after that track and Muse’s “Unintended” was right before. So, there you have it. I fell to Abba’s “Dancing Queen.”

You had me at: "you can ji-ive." HA!!
It's interesting how serious a matter music taste is as, for some reason, it becomes identical with identity.

And Donna Summers taught me one. :)
It goes with that idea that kitsch reinforces the actual value of 'actual' art, I would think. Meat is great but so is dessert or fruit.
I also saw Mamma Mia. I believe it was a total of three times. The excuse for seeing it three times would be that it was on cable. The actual answer is that I actually enjoyed it all three times. :)

If you had a hypothetical accident while Unintended played on your iPod, you'd be more likely to blog about it though, right?
Thx for this.
-JJ

Ha. I feel better for liking Wham's Last Christmas now. ;)
I did think that Christine Baranski was one of the reasons why the Mamma Mia movie was a success. She's hilarious!