A New Take on Snow White and the Seven Dwarves 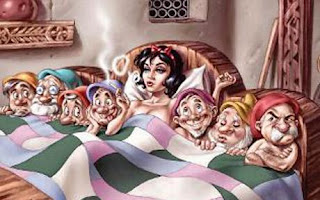 Well, folks, Disney is mad at this new 'spin' on the 'Snow White and the Seven Dwarves' fairy tale.
I personally think Disney is angry because a piece of its property is being reinterpreted sans its approval. Well, Disney, the thing is most people rather approve of satirical humor, you know, the kind we're bound to encounter daily in real life.

How dare people reinvent pre-existing myths, right? Well, I don't know where we would be without encouraging the instinct that the talented have to reinterpret literature, but Disney apparently, does not think so. As I look at this ad, I can't help but think of Bertolt Brecht, the master 'adaptor' of other folks' work.

HA! I'd ditch Disney's version and go for this one in a second!

Def. dibs on this. Brill!

This would make for a sweet book, actually.

What is culture if we cannot build on that which came before us?

I think Disney is one of the most ironic examples in intellectual property. They took stories from other sources, like Brothers Grimm fairytales and Buster Keaton's Steamboat Bill, Jr., and made them their own, but then they turn around and lobby Congress for Copyright extensions in order to maintain exclusive right to "their" property.

It just feels very corporate. I can't remember of an instance where a bully managed to suppress creativity.

And yet when Robert Crumb did this it was just creepy.

i don't see how they can claim anything. did they somehow buy the rights to a centuries-old traditional folk tale along with the thousands of depictions? just another reason i still boycott disney products.

what i found interesting is that they didn't take into account to represent at least one other skin colour in the dwarves. there went a market.