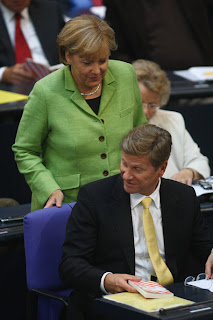 A favorite thing of mine is news commentary and cable talk. The thing becomes even more enjoyable to me when I follow German commentary. The coverage of the last election which resulted yesterday in Merkel winning was quite gripping.

Those of you who do German will undoubtedly get a kick out of the 'bias' in this Merkel v Westerwelle commentary. By way of context, Merkel is a conservative and Westerwelle is a liberal. The openly gay leader of the FDP allied with Angela Merkel who will continue to be chancellor. Westerwelle will most likely be vice chancellor and Foreign Minister.
Quite a marriage, indeed!
Ah, also the caption of the video on Spiegel TV says: "Hochzeitsnacht: Westerwelle kuschelt, Merkel mahnt." Translated, "Wedding night: Westerwelle's cuddling whereas Merkel is exhorting."
Hmm. Tough to pick up on bias there.
Watch this. I found it oddly entertaining.

Ha, Someone like Westerwelle would have been a media darling over here, don't you think?

This picture is priceless!
I just about died when I heard 'kuschelt' too.
The show that is German politics!
I'm a Westerwelle fan myself! ;)

Ha. Spiegel TV is about as objective a Fox News. :)