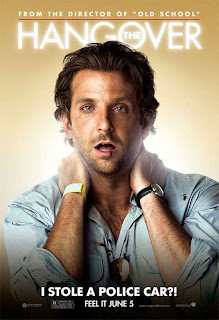 Well, it's about time they made a movie about it, eh?
Yes, I did see The Hangover.
What sold the movie to me was this here attached poster of Bradley Cooper.

I first saw this poster on a foreign subway station and I remember thinking, 'add this to the list of things to see.'
So, we went to the movies. Even got popcorn. And I don't do popcorn. I don't do Blockbuster movies either, but there you have it. Every rule has them. Exceptions, that is.

Now, B.R., the movie goer, will say that she liked the film. She actually laughed a lot. I found myself laughing the most when the characters were satirizing the comic text that is Vegas. In this regard my laughter was influenced by B.R.'s travel bug and academic eye for close reading. But why bring that up here. We're talking about an entire movie the premise of which is, 'what the heck happened last night after exorbitant amounts of alcohol were consumed?'
Right.
I can't really use literary theory to decode this.
Well, I could try but I reckon I've had enough comedy for a week.

The main reason, however, why I suggested that we go to the theater and watch this film is because of Bradley Cooper. I first noticed Cooper when he appeared in another mind-teaser (my coinage, folks). Don't judge. It was summer. My best pal was visiting from Germany and our house was hot due to air conditioning being on sabbatical for weeks. We lived in the dessert after all. Yada, yada, yada, we were in the mood for Wilson/Vaugh jokes.

Anyway, Cooper's performance in the Wedding Crashers did make me think. I remember noting that he would go places. His blood-shot eyes seemed to have a kind of torture quality to them that made them interesting.

Plus, Bradley Cooper is a beautiful person. He sports a kind of masculinity that's moderately bathed in feminine sensitivity. Ah, and his upper body suggests that he lifts and does yoga. Yes, I do watch films at times mostly because of who stars in them. Blame it on my weakness for aesthetics.

So, yes, I watched the Hangover. No, I won't officially review it here. I've got my rap to worry about, after all.

I will note two things about it: it captured Vegas realistically. If you're like me and have spent time in the dessert city you will feel like you're right on the set.

And Bradley Cooper. Objectification aside, I look forward to seeing him properly cast so that he can show his acting chops better. But for now, let him take advantage of his aesthetic superiority. And why shouldn't he?

I was starting to experience withdrawals and found myself reading older posts. I know this is the kind of language that makes you go, 'dude, get a life!' :), but I had to voice it here.

Fave bit: "We're talking about an entire movie the premise of which is, 'what the heck happened last night after exorbitant amounts of alcohol were consumed?'"

I look forward to more travel anecdotes. I assume, Bruno will be reviewed? Pretty please....

My words, 'I bet Bri thinks Bradley Cooper's kind of alright. She'll watch this....'
And voila. :)
How was swimming in the freezing lake...?
I heard a little something. I miss the posts. But I'm special too, though. I get texts. :)
I've been reading John Meacham's book and I look forward to the review. You've mentioned it a few times but would like to know how you're rating it.
Happy 4th and later.

I too experienced withdrawals, and figured you must have gone on one of those weeks long vacations that you European types like to take. Nice to have you back.

I enjoyed this movie too. Won't add it to my collection, but it was fun and I laughed a lot.

Oh, the surprise for me was the bearded character, the one who names the baby Carlos..... Ha.

I'm borrowing this, 'Yada, yada, yada, we were in the mood for Wilson/Vaugh jokes.'

"Did you reserve the room with your card or did I?
Was it the Stratosphere or Bellagio?
Please, let it not be Circus, Circus.... That would be cruel."

'And don't forget your field trip...'

I enjoyed this in the theater, too.

RSVP-ing for withdrawals...
I could see you and yours getting a laugh watching stuff like the Hangover. I watched it. I laughed.

I've meaning to watch this too. Mostly because of Vegas....

Why is there a tiger in the bathroom?!

-Ah, nice, very nice to hear.
I will be reviewing Bruno. Cohen's getting a lot of attention internationally as well.
-Right, Bradley Cooper's always grabbed my attention. He's got the whole tortured writer with a hint of waspy prep that I find quite unique.
Will comment about the freezing lake. It was frozen till a couple of months back. No joke.
-Ah, thanks again for the note. I also experienced them on this end.
-Ah, yes, the Stratosphere. And there could easily be a tiger there.... :)
thanks all.