Why Donald Duck Is the Jerry Lewis of Germany 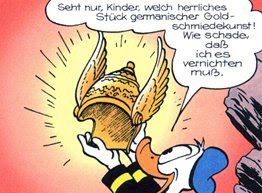 A bit from the feature says:
"“Donald is so popular because almost everyone can identify with him,” says Christian Pfeiler, president of D.O.N.A.L.D. “He has strengths and weaknesses, he lacks polish but is also very cultured and well-read.” But much of the appeal of the hapless, happy-go-lucky duck lies in the translations. Donald quotes from German literature, speaks in grammatically complex sentences and is prone to philosophical musings, while the stories often take a more political tone than their American counterparts."

I find cross-cultural communication totally gripping precisely because of how cultural 'signs' are rendered/translated.

Like David Hasselhoff. What's up with some tastes?
Odd how some cultural signs are translated.

Like David Hasselhoff. What's up with some tastes?
Odd how some cultural signs are translated.

The Donald is a staple of America hegemony, we're supposed to identify with him.