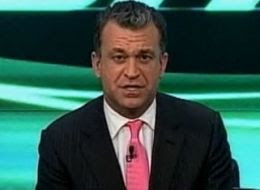 I like watching Business News. So, the other day I was not suprised to find out that Dylan Ratigan left CNBC effective immediately as he displays a kind of candor and authenticity that I just don't get from most political commentary and business-related shows.
In my view he oozed more professionalism and know-how than most moderators out there. Plus, he is definitely watchable.
The effects of recession are easily witnessed on the airwaves as well. I suppose Ratigan will get his own show soon. Let's hope it's not at 9:00.
A bit from HuffPo notes:

The New York Post's Page Six reported Friday that Ratigan had quit following a dispute with network VP Susan Krakower — though insiders deny to TV Newser that Krakower is responsible for Ratigan's exit:

"It's less about Krakower and more about him," says the source. "He wants to be the next Letterman."

Steel told TVNewser that Ratigan's departure is a mutual decision and said, "Due to the serious economic times in which we live, we made a decision that it would be a distraction for Dylan to host 'Fast Money' today."
More here.

He looked on the edge every time he was on Morning Joe. He's watchable, though, sure.

He sounds cocky on the air. He's enjoyable to watch.

At least he has the appearance of knowledge.