Franz Ferdinand: Get a Clue from Muse 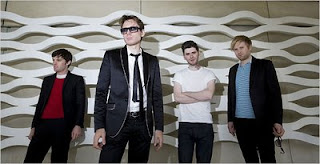 About five years ago I had one of the best musical experiences of my life. I was taken to a small venue to watch Muse live in concert. I don't know what struck me the most, the fact that Muse is fantastic live or that the setting was truly intimate and conducive to true artistic enjoyment. Or perhaps that I was experiencing an indie rock sound that I had not heard up to that point. After that experience, we discussed how unique the concert was and that hopefully the band would retain their sound when faced with the pressures of fame on the fast lane, aka, the mainstream. At that point I knew Muse would hit it big.
And hit it big they did.
Did they ever!
They went from performing in very small venues to giant sold-out stadiums.
And yet, whether they play for 100.000 or 100 people, this band has managed to retain their unique sounds quite well.
Enter, Franz Ferdinand. Their music was indie and unique in the beginning but when their track "Take Me Out" started to get a lot of airtime, Franz Ferdinand became mainstream. And so did their look. Although their originally unique style was solely theirs, once the attention fell on them, their unique clothing texts started to get read much more often.
Franz Ferdinand is an example of a rock band that understands too well the difficulty to resist the side effects of the mainstream. After having experienced the mainstream, they are now back trying out their new sound in very small venues, away from music execs in an attempt to re-enter what I call Indie-topia (yes, it my coinage).

And I wish Franz Ferdiand the best. I want them to be remembered for their music and not for their idiosyncratic haircuts and matchstick pants. I remain a fan, after all as I did think they had potential in the beginning.

The Times has a feature on them today, as well. A bit says:

"Since then the members have found that their aesthetic — from their high-hat beat to their mod wardrobe — has gone mainstream, especially in Britain, Mr. Kapranos said. “You feel like, right, that’s become so much a part of musical vocabulary of the contemporary band, it’s now a cliché, and you have to leave it,” he said.

So no more “angular guitars,” Mr. McCarthy said, a description that has stuck to the band as surely as their slim-cut suits. (Or their angular haircuts."

It was also about five years ago that I found out the night of the show in the middle of the concert that Muse was playing. I was so mad I missed it. Maybe that was the same show. I heard it was amazing.

I enjoyed the first FF album, but after that I felt they sold out a little bit and their sound got old hat really fast. Happens to too many.

I like Franz Ferdinand. Hoping they get get their inner indie out....

Used to like them, too. Muse, what a band! have not seen them live yet.

The slim-cut suits is what I remember, mostly. I hope they start making good music again.
Just revisited Muse today. Such good stuff!

angular cuts, i remember those.

It's an example of the packaging of a gift taking over the gift.
I genuinely want them and every artist to succeed. By keeping a low profile and focusing solo on music they are trying to make sure they will do just that: succeed. And I continue to be a fan.

Toni, yes! I want her to succeed!

The FF were great, then they were bland and I hope they get great again! I agree. We need to support artists and have faith in them.

And, 'fashion' is NEVER trivial. Many a band have been turned to 'models' and fashion symbols at the expense of their sound.....