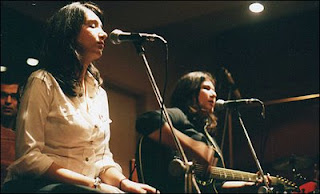 "But, like all other professions in the country, music remains male-dominated.

For women it is another matter altogether - raised eyebrows are the least possible obstacle.

Some have broken the barrier, none more so than the late Nazia Hassan, who took the sub-continental music scene by storm with her pop music in the early 80s.

There have been others who followed in her footsteps, although none have been able to reach those dizzying heights.

That may account for all the hype surrounding Zeb and Haniya, Pakistan's first all-female music band.

Another is the fact that their debut album, Chup (Quiet!), was recently released to rave reviews in Pakistan's major newspapers."
More here.

Cool. I'd check out their music. When women are given the same rights as men, true culture can flourish. No other thought makes me hyperventilate faster and worse than the thought of women being repressed. Here's to hoping that more women will be allowed and encouraged to make art.

We forget very often how much progress women have made. Here's to hoping that equality becomes a reality for everyone everywhere. In my mind, there where the women are given the same opportunities, there is progress.

I'd totally check them out.

I would definitely support this kind of art.

I'd like to listen to their music. Pakistani rock, now that's new.