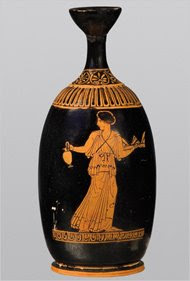 "The main misconception is the notion that women had a universally mute and passive role in Athenian society. It is true that they lived with restrictions modern Westerners would find intolerable. Technically they were not citizens. In terms of civil rights, their status differed little from that of slaves. Marriages were arranged; girls were expected to have children in their midteens. Yet, the show argues, the assumption that women lived in a state of purdah, completely removed from public life, is contradicted by the depictions of them in art."

Right, the women were not visible politically but they were strong behind the scenes.
Sappho, anyone?

The creative impulse is especially kicked in gear when it is not allowed to shine.

Quite often the Greeks are elevated to an untouchable standard but we forget that the women and the enslaved folks were less than invisible. But then again great art is created in difficult settings. What does the poet tell Orlando in Virginia Wolff's novel? Anyway, he says sth like, you can't create true art without suffering.
And to that I say, YEAH! to suffering.

The behind-the-scenes are never given due credit. Good article!