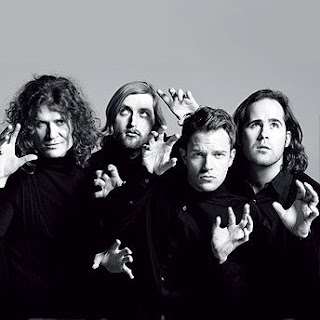 I've already outed myself as a bona fide fan of The Killers. Most of my playlists have at least one song from their albums and just today I gave "Uncle Johnny" a listen. And the past six years have been richer musically on account of my fondness for the band and my renewed appreciation for and continued visitation of the solid artists who have informed them artistically. Whether you like their music or not, The Killers reveal as much about the 'scene' and culture of indie rock by virtue of how they perform, what they wear, and who they like musically as they do via their own art.

The Rolling Stone has a bit about frontman Brandon Flowers and his penchant for not always expressing rightly what he feels, per them.
Frankly, I don't understand why Flowers' speech is worthy of such continued scrutiny. As an artist he needs to express himself. Some journalists are more fascinated by his eye for couture and his personal religious beliefs than they are about his influence on contemporary rock and his own art. To me it makes full sense that Flowers would be the kind of rocker he is. Like basically everyone else, he is multilayered and influenced by various things. Maybe my experiential knowledge of the West has something to do with my unequivocal acceptance of the band's music and Flowers' lyrics. Their music, after all, feels much more authentic to me when I play it out West.

At the end of yet another year, I am grateful to the The Killers' many contributions to my music experience. And to Brandon Flowers' ear and eye for the right indie, synth-pop, rock sounds and 'mad' couture.

Here are two snippets from the piece. The entire article is here.

"Brandon Flowers is having trouble explaining himself. Maybe it's because nothing about him adds up: a couture-wearing synth-pop fanatic who wants to be Bruce Springsteen; a devout Mormon who sings in a decadent Las Vegas rock band. Maybe it's because when Flowers talks, he tends to get in trouble — like when he bragged that Sam's Town, the previous album from his band, the Killers, was "one of the best albums in the last 20 years" before anyone heard it."
...

"What does he mean by the line that provides his album title, "I want the new day and age," in the song "Neon Tiger"? "It means, I want a new day and age — I think that things could be better," Flowers says, then pauses for nearly 10 seconds, looking down at the table. "I don't feel like I'm allowed to say some of the things that I feel." Why? "I'm too handsome."

How come people are so taken by the fact that he's a Mormon? So, aren't there rockers who subscribe to religion out there?
Uhm, yeah!
Let's face it, it's not always easy for not-so-good-looking reviewers to have sympathy for beautiful, talented people. Brandon Flowers happens to be both.

Good piece. A fan too!! And I wish I could 'rock' couture the way Flowers can.

And I actually just thought of Lester Bangs' 'analysis' of beautiful people just now. I wonder what he'd say of B.F.? Since he likes Iggy Pop and all....

Which time zone are traveling to now? Judging from the time of the posts, I thought I'd ask.
Good piece on RS. I suppose rockers always lend themselves to being scrutinized. Especially the good-looking ones. And Flowers seems to be aware of his own good looks. And their power.

And this is an interesting photo. Ronnie Vannucci looks good.

Good piece, thanks.
They represent a theme, I get it. :) It's never just about the music with many music lovers.

"Some journalists are more fascinated by his eye for couture and his personal religious beliefs than they are about his influence on contemporary rock and his own art."

I suppose things like being a Mormon, staying away from the rock scene, well, as much as he seems to be able to, and his good eye for high fashion are some of the things that 'mark' him. And in the rock business it's all about asserting individuality in an otherwise pretty conforming business. Rebels conform too. To rebellion, that is.

But I agree. His words are put under the magnifying glass a tad too much. And I like too. What he says has no bearing on how I react to his music. Guy gets music.

People like when things fit into molds that make sense to them. Flowers doesn't fit into any such molds. That is why he is overly scrutinized.

But frankly, I don't think he minds.

At times scrutinized attention brings much creativity, too. It makes the artist aware of the unspoken truths about him/herself.

His 'differences' are part of the hype. Let's see, he's a native Vegas guy who grew up in Utah. And his flare for costumes and religion is too hard to understand for some?!?
Hm.
Good music can only be good if it's informed by different life experiences.

So, when Flowers says 'I'm too handsome,' is he using his beauty as a reason or cause?