GnR's Chinese Democracy: Where the Past Clarifies the Present 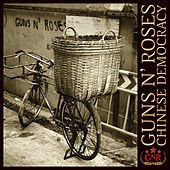 Most of the early part of my teenage years looked like this: boarding school and enculturation, long discussions and music sessions with my most musically 'with-it' and very-much-in-the-know and in-the-now friend Eli., rocking out to Metallica's Master and Puppets with the guys in my class, memorizing random English literary texts almost on a quotidian basis, and a whole lot of MTV that Eli and I would run to watch every single day after class.

Guns n Roses were more than just music for us. Axl Rose and co. represented a kind of text we had not encountered before. It was a text of never-before-seen possibilities, a text of identity, even. And since most teenagers also want to be accepted by the bigger group, we also listened to such bands as Metallica and Europe. We were but 14, after all. Guns n Roses, however, was what we thought marked us as different. And we fully embraced that difference.
To Eli and me tracks like November Rain, Paradise City, and Sweet Child of Mine were not just tracks, they were a way of life.
Eli and I sort of knew that there were Metallica people and Guns n Roses people. And while, for the most part, we espoused a policy of inclusion, we enjoyed self-identifying as true GnR fans. True music fans are unequivocal about their dedication to certain music. It's not just a hobby or a passing interest, it's a modus vivendi.

Now as an adult I continue to be one of those music fans who didn't give up on Axl Rose's talent. While our music tastes tend to be located in more typically indie pastures, we will always show our loyalty to a band that represented so much more to us than just music. The music of Guns n Roses was to us a rite of passage. And every rite of passage begs for attention and respect.

Ergo, will the new much-anticipated Guns 'n Roses album, Chinese Democracy become a high-frequency playlist?
But of course!
And here is a taste of glories past. Guns n Roses 9-minute-plus track November Rain:

Oh, I'm so looking forward to the new album. It's been 13 years too long. Axl was, by far, the soul of the band. I look forward to supporting his project.
I enjoyed this narrative. thx....

Chinese democracy is not out yet, right? Nov. 24th, last I heard.

Chinese democracy is not out yet, right? Nov. 24th, last I heard.

I agree. It doesn't matter whether you're a fan or not. GnR simply changed the music scene for all of us.
Ha. I liked the, there are Metallica people and then there are GnR people. :)

By the time I got into watching MTV, the glory days of all music videos all the time was past, but when they did play videos, I still remember November Rain being one of the greats. A truly emotional video.

The first band I fell in love with was The Cranberries, and so there is always a place for them and Dolores O'Riordan in my playlist, even though I'm more indie these days myself.

I liked this. Music is so personal and that's another reason why it's so powerful a medium. thx.

They are responsible for some of the most pitch-perfect tracks of the rocknroll realm. November Rain is just incomparable!

I like. It's true.
Those of who know you in real life know that music is too important or you to quantify it.
But this, this I liked a lot. And, of course, I like the context of the past, that you provided.
It rarely happens on the HetPer so it's much appreciated it. :-)

And by the way, I have been plagiarizing, 'Music, I love to distraction.'
So, I just thought this is as good a place as any to out myself. :-)

bri,
i just saw this on the RS. it's from an interview with Metallica's James Hetfield:

"Have you listened to the leaked tracks from Chinese Democracy?
I haven't. I'm sure Lars has heard it — he's a big-time Axl follower [laughs]. He's followed him around and annoyed him, trying to capture some of the rock-star-ness. We played a festival with them in Germany in 2006 — not on the exact same day — and we went down and watched them. The guy's a good frontman. There's a lot of extra stuff that goes along with that, but he is talented."