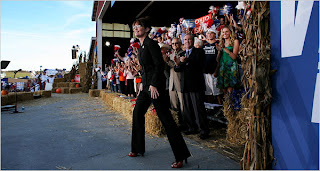 Every news program I have marginally or solely seen/listened to from yesterday to today has not only mentioned but also analyzed the GOP's decision to give Sarah Palin a substantial makeover.
And people are having strong reactions to the $150.000 makeover. Some are even pointing out that the attention the Palin camp is getting on the matter is a sign of sexism and that male candidates spend thousands on designer suits all the time.

Personally, I don't know any hockey moms so I can't rely on personal experience to comment on this. Cognitively, there are a number of ways to interpret this, of course.

The thing I'm thinking about is the fact that the hockey/soccer mom image, at least the one that stereotypes inform, does not, for the most part, reside in a 'Prada-informed niche'. Prada does not come cheap.
When John Edwards' $400.00 haircut bill was made public many people commented on it and presented it as a sign of elitism. I don't tend to think that there is a direct correlation between wardrobe choices and elitism but I can see why certain clothing items could make some equate the wearer of such things with elitism. And this brings me to the whole 'hockey mom' notion as one that's [apparently?] antithetical to elitism.

Hockey moms and Prada items are not mutually exclusive.

Bottom line: The text behind clothing is a strong one. And aesthetics will not be irrelevant anytime soon. It never was in the first place.
The NY Times article points out:

"Such an image is unhelpful at this late stage of the general election, Republicans said, especially when many families are experiencing economic pain, and when the image applies to a candidate, like Ms. Palin, who has run for office in part on her appeal as an outdoors enthusiast and former small-town mayor who scorns pretensions.

“It looks like nobody with a political antenna was working on this,” said Ed Rollins, a Republican political consultant who ran President Ronald Reagan’s re-election campaign in 1984. “It just undercuts Palin’s whole image as a hockey mom, a ‘one-of-us’ kind of candidate.”

Mr. Obama and his wife, Michelle, have been described as elitist by both Republicans and Democrats at times, and so much was made when she appeared on “The View” in June in a black-and-white patterned dress. Turns out it sold for $148 at an off-the-rack store.

Few Republican operatives or politicians, even those critical of the McCain-Palin campaign, were publicly criticizing the ticket on Wednesday over the clothing purchases. Some said privately that doing so would be akin to kicking a campaign while it was down.

Others said the issue was tainted with sexism, given that male politicians often spend thousands of dollars on suits.

“She had a legitimate need to purchase clothing to get her through three months of grueling campaigning in the constant spotlight of television cameras,” said William F. B. O’Reilly, a Republican consultant in New York. “No one would blink if this was a male candidate buying Brooks Brothers suits.”
Read more here.
Posted by B.R. at 10:38 AM

Hockey moms can and should wear designer things. Of course. The thing is hockey moms don't have a budget that allows for a 150.000 shopping spree. And that is the problem.

Not the best of things for them to deal with so close to election. The message she's spreading via her clothing is dual and that's a problem.

I don't think anyone carries illusions that any party-nominated presidential or VP candidate is one of us. You simply can't get to that political level without hordes of money. So it's not surprising that McCain has 7-ish houses and Palin spends $150 large on clothing. But it doesn't exactly send the message that they're pulling for joe-six-pack and joe-the-plumber, now does it?

As for Obama / Biden? I'm sure they have money flowing out of their pockets too (and unfortunately none of it has landed in my pocket). But somehow Obama has more credibility when he talks about wanting to work for the little guy. Why is that?

I agree: "Hockey moms and Prada items are not mutually exclusive."
It becomes a problem when it gets in the way of the main perception that's being sold, i.e., the average mom thing.

Per Chris Matthews on Hardball, "Sarah Palin's wardrobe is $23.500 more than Joe the Plumber's house."

She looks great. Really. But the message she is selling is a tad different from the message she sells by virtue of what she wears.
Really, 150K?
My parents made that much the past TWO years.

"i say beware of all enterprises that require new clothes, and not rather a new wearer of clothes." - henry david thoreau

that said, 1850 was a long time ago, before moving pictures and the internet and the usa's departure from the "third world".

the republican image-minders know that image sells. obama knows that image sells. in fact, despite the fact that i think obama is the better candidate, many people will vote for him based partially upon his appearance, even if that decision is made in the subconscious.