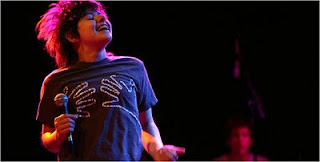 This is an excellent article.
Bloggers have influenced the music world a lot. Bloggers are now having a say not only when it comes to music information dispensation, raising awareness about new acts, boosting CD and merchandise sales but also booking shows. A bit from today's Times says:

"Indie-rock, with full blog support, is now the refuge for the musicianly impulses of progressive rock. Pattern Is Movement, a two-man band (drums and keyboards) from Philadelphia, records mercurial songs that juggle Minimalist repetition, musical-theater melodicism and progressive-rock asymmetries. But onstage, like duos from Lightning Bolt to the Dresden Dolls, they happily pummeled the music, vigorously knocking down any hint of effeteness. Women, a four-man band from Canada, moved inexorably between the pointillistic guitar patterns of King Crimson and the enveloping squall of Sonic Youth, when they weren’t singing about “the place where nobody has been keeping track.
...
On Tuesday afternoon Oxford Collapse, a Brooklyn band whose burly songs try to bridge post-punk and arena-rock, looked into its audience between songs and asked, “Anybody need time out to blog?”
Read it all here.
Posted by B.R. at 11:50 AM

Blogs have fully entered the jargon now. Very often that's where I get new info about music, film, and other things I'm interested in. Thx for the Lennon tip, btw. Will be on it.

I love the Dresden Dolls. And, I, too, get most of my music info from my fave blogs.....

The margin has been getting more and more attention and few pop things are as marginal as Indie, true Indie, at least.

I feel like I need time out to blog....
Which blogs do you enjoy reading when it comes to music info?

the internet: a truly democratic medium.

blogs have always been nice to calico. :)