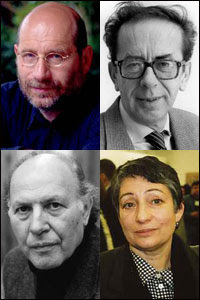 NPR has an excellent piece today on Best Foreign Books. I find all the choices worthy of attention but the one that stands out to me is Ismail Kadare. The France-residing Albanian writer has a fantastically unique style that has translated with good facility into French, English, and tens of other languages.
Here are some titles from Kadare that I gladly and fully recommend:
1) The Three-Arched Bridge
2) The Concert
3) Spring Flowers, Spring Frost

Also, here is a snippet from his writing.


As he was crossing the intersection,Mark Gurabardhi
noticed a crowd of people, which was growing by the
minute, gathering on the right-hand side of the street.Most
likely he would have walked past without a second glance if
he hadn’t heard someone say the word snake!—spoken not
in fright but in astonishment.
A snake at this time of year? Now that was out of the ordinary.
. . . Mark went over to the knot of bystanders to see
what was going on.Most of the people standing around were
passersby, looking on just as he was.“Holy smoke, it really is
a snake!” someone said, as they all shuffled around to let newcomers
get a look.“But how can you tell if it’s dead or alive?”
One glance was enough to tell Mark that it was neither dead
nor alive, but just hibernating, like a normal reptile.

...
Two youngsters (something about them made it clear
that, without specifying how, they were the ones who had
unearthed the snake) flashed their eyes in pride at the crowd.
To demonstrate their rights of ownership, they poked the
creature this way and that with a stick.When they lifted the
reptile off the ground, people shrank back, but each time
they did, someone in the crowd piped up with a “Don’t
worry, frozen snakes don’t bite, and even if you do get bitten,
it’s not dangerous, the venom’s too weak, like it’s diluted
by the cold. . . .”
A man in a felt hat seemed to be looking for a target for
all his pent-up anger. “We’ve come to a pretty pass,” he
seemed to be saying. “Where but in Albania do you get
minds as warped as that? No, we don’t get up in the morning
to do something useful, we get up with some crazy idea
in our heads—unearthing sleeping snakes! What’ve you
got between your ears, you little perverts? You wouldn’t lift
a finger to help save those antique vases or ancient bronzes
people are forever digging up all over the place these
days—oh, no, you wouldn’t, but you don’t miss a beat
when it comes to finding horrors like this!”
Two others were discussing what to do with the snake.
You could bury it again where it had been found and let it
wait for warmer weather, as nature intended; or you could
put it by a fireside—you’d have to be very careful, all the
same—and let it thaw out.
“Have you all lost your minds?” another bystander blurted
out. “All winter long we’ve all been frozen to the bone. Nobody cared a fig about us when we were cold—and now
we’re supposed to worry about some lizard?” Then an old
woman chimed in. “Everything’s gone to wrack and ruin,
mark my words. I’ve been around for many a long year, God
knows, but I’ve never seen anyone try to stop a snake from
hibernating in peace!”
Posted by B.R. at 7:16 PM

Can I borrow any of the books?
Most importantly, do you have them in any of the translations I can read?

Do you guys have any Kadare at home that I could borrow? Will be coming round tomorrow.... thx.

I believe the one I have in English at this point is The Concert. Kadare's books are easily procurable now in bookstores and online.