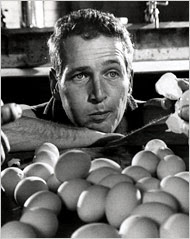 Ohio's own Paul Newman died on Friday at the age of 83. The cause was cancer. The actor/director/philanthropist will be missed. And as Pauline Kael intimated back in 1977:

"“When a role is right for him, he’s peerless,” the film critic Pauline Kael wrote in 1977. “Newman is most comfortable in a role when it isn’t scaled heroically; even when he plays a bastard, he’s not a big bastard — only a callow, selfish one, like Hud. He can play what he’s not — a dumb lout. But you don’t believe it when he plays someone perverse or vicious, and the older he gets and the better you know him, the less you believe it. His likableness is infectious; nobody should ever be asked not to like Paul Newman.”

They rarely came in that caliber. He'll be missed!