Weight Not Only Measure 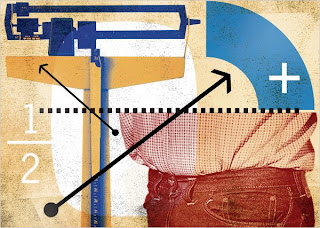 I found this interesting. Even though the general attitude isn't quite congruent with the premise of it.
"“People get confused by the words and the mental image they get,” said Katherine Flegal, senior research scientist at the C.D.C.’s National Center for Health Statistics. “People may think, ‘How could it be that a person who is so huge wouldn’t have health problems?’ But people with B.M.I.’s of 25 are pretty unremarkable.”

Several studies from researchers at the Cooper Institute in Dallas have shown that fitness — determined by how a person performs on a treadmill — is a far better indicator of health than body mass index. In several studies, the researchers have shown that people who are fat but can still keep up on treadmill tests have much lower heart risk than people who are slim and unfit."
graph per ny times
Posted by B.R. at 7:05 PM

most people get so obsessed by the digits on the scale that they lose track of the fact that they need to check with their self and actually find out at what weight they feel the best.

another example of certain aesthetics getting in the way of health.... i'd bet this study was not conducted by Rachel Zoe. :)

Is it just me or are there more articles [than usual] these days on weight and fitness?
The Times has had a daily feature on it, seems like....
My rule of thumb re: things fitness states:
If you can't fit in your fave Jeans comfortably, you need to
a) lay off the friend food
b) divorce the brew
c) stop chewing after 7pm
d) refuse to buy clothing of a bigger size till you can fit in your normal clothes.
It's worked fine so far..... The better I fit in my clothes, the better I feel overall. So my text would read like this: if I'm wearing my favorite items and/or if I tend to navigate towards my 'high frequency' items, I'm doing pretty darn good physically as well emotionally.
Signing out....

Correction:
Not 'lay off the friend food' bu rather 'fried food'..., in my case french fries.
Even though my 'friend food' could be ice cream so come to think of it, that could go too....

I've always been healthier than my partner who's about 25 pounds lighter.