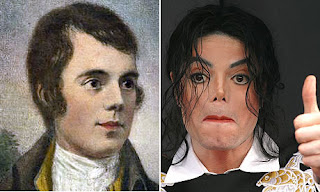 "Robert Burns's poetry might have been dismissed as "sentimental doggerel" by Jeremy Paxman but that hasn't stopped diminutive I'm A Celebrity contestant David Gest and pop legend Michael Jackson from recording an album of the much-loved Scottish poet's work. Gest's spokesman said the album is a modern musical take on some of Burns' classic poems, and had been a long cherished project.

"We haven't changed the lyrics but the music is now modern and brought up to date," Gest said. "Michael and I had fun. It's something we have always wanted to do…because he is our favourite poet."

Hmm. I would have figured Michael Jackson for a Dante fan.

I have read stranger things. Will see how the music will sound. 'Moon walk' to Frost? Hmm.

Jackson's so much of a fan that he surgically restructured his face to resemble Burn's.

Seriously, though, there's no denying the classic appeal of MJ's early stuff.

Yeah, I'd love to see what MJ would do with Dante.
His early stuff is def. golden, sure, a 'Frost musical' though, hmm, I don't know. I'd have to wait and see.

Frost? Burns? What am I missing? At risk of exposing my ignorance, is it a typo or a subtle connection that I miss?