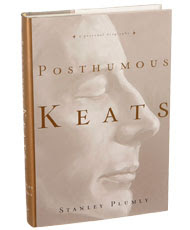 You lovers of Keats will like this.
"When John Keats died in February 1821, just 25, his friends believed that it was the reviews that killed him. In truth the critics could hardly have been less kind, especially about Keats’s second book, “Endymion.” “We venture to make our small prophecy that his bookseller will not a second time venture 50” pounds “on anything he can write,” a reviewer for Blackwood’s Magazine wrote. “It is a better and wiser thing to be a starved apothecary than a starved poet. So back to the shop, Mr. John.”
graph per ny times
Posted by B.R. at 10:46 AM

Very ouch but very true. It's infantile to think that everyone just happens to be published right away and that the journey is hunky dory. This looks good. Will read it as I love Keats and have little regard for mean critics!