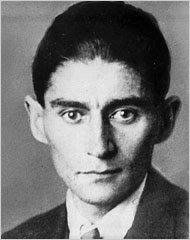 Just before his death, Kafka expressed his desire to have his writing burned. His friend, Max Brod, refused to acquiesce to his request. The rest is history.
Here's an interesting feature from the Times.
"Asked if the Kafka papers remained in the apartment, she scoffed, “Do you think we are so stupid?”
Implying that the valuable documents had been stored somewhere safe, Ms. Hoffe then described a sense of being pressured from all directions, especially the state of Israel, to yield the papers or come to a decision on their future. She felt under siege, caught in a web, she added.
Her blue eyes yielding no hint of irony, she said, “It is truly Kafkaesque.”

2 Mill for a manuscript?! Wow!
I feel weirded out by this story too. I mean, if the author doesn't want to publish his work in the first place, it add insult to injury to cash in on him so blatantly.
The whole thing is just too Kafkaesque!!!

To ironic... that his work is being used as a tool of 'identity.' And yet, a person who struggled more with it is hard to find.....