No, this is not a post on the Italian film Ladri di biciclette (Bicycle Thieves, 1948)
directed by Vittorio De Sica. 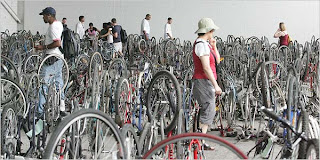 This comes from Toronto.
One of the main reasons why I like Toronto is how well the city caters to bikers. Alas, the story the Times reports on today is not about Toronto's nice bike paths. It's about Toronto's biggest bicycle thief and his bicycle operation. What a story!

"The jumbled collection of bicycles suggests that Mr. Kenk is the unofficial world champion of bicycle thieves. But as he awaits trial next month on 58 charges related to theft and drug possession, the biggest mysteries of all are Mr. Kenk’s motives and his ultimate plan for the armada of steel, rubber and aluminum he amassed.

“He’s easily the most hated man in Toronto,” said Alex Jansen, a filmmaker who has been working on a documentary about Mr. Kenk for more than a year as part of a study of his rundown neighborhood’s transition to hipsterdom. “But I just found that it’s not as black and white as I originally thought.”

Reading this reminded me of how I felt the two times my bikes was stolen. The picture of the stolen bikes is quite sth.

Cerrtifiable1 Got goosebumps reading about this. I bet psychologists will love to write on his 'hoarding.'

You could tell I felt strongly on the matter.
I meant to write "certifiable!!"

It's always such a blow to get your bike stolen. Even if it isn't that valuable, you grow a personal attachment to them. I'm paranoid about leaving my bike anywhere. I use two different kinds of locks when I lock up, but I still don't feel safe leaving it anywhere in the open for a long time.

What a creep of a man! I agree with Sra. It's painful to see your bike stolen. And I've gone through that experience a few times.