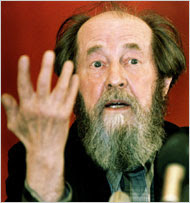 Rest in peace, Solzhenitsyn.
The brave author, also a Nobel Prize winner, suffered two decades of harsh exile as a result of his writings on the absurdities and tormented life journeys of many Russians under the Stalinist regime. Solzhenitsyn himself is an incredible example of someone who underwent "soul-crunching" persecutions and yet survived.
He died at the age of 89.
A bit from the Times feature today says:
"Mr. Solzhenitsyn had been an obscure, middle-aged, unpublished high school science teacher in a provincial Russian town when he burst onto the literary stage in 1962 with “A Day in the Life of Ivan Denisovich.” The book, a mold-breaking novel about a prison camp inmate, was a sensation. Suddenly he was being compared to giants of Russian literature like Tolstoy, Dostoyevski and Chekhov."
Read more here.
graph per ny times
Posted by B.R. at 9:37 AM