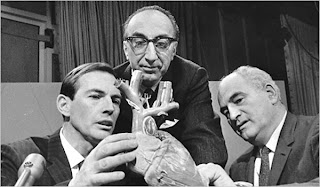 People like Michael E. DeBakey are born to be great. The heart doctor, "whose innovative heart and blood vessel operations made him one of the most influential doctors in the United States, died Friday night in Houston, where he lived. He was 99.
One of Dr. DeBakey’s innovations helped preserve his own life in 2006, when he underwent surgery to repair a torn aorta. He had devised the operation 50 years earlier. He spent months making what he called a miraculous recovery and then returned to an active schedule."
Rest in peace, Michael E. DeBakey
Read more here.
graph per ny times
Posted by B.R. at 4:12 PM

Yeah to science! 99, though. He lived a good life!