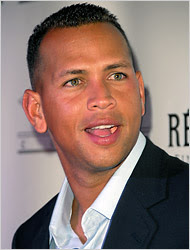 A friend of mine trained in Clinical Psychology tends to use phrases like "wiped out frontal lobe" or "boundary-marking" and so on and so forth. Granted, in her rhetoric such terminology makes sense as it is endemic to her field.
However, I have noticed that more often than not certain words seem to be used in a decontextualized fashion. During an episode of Curb Your Enthusiasm in which Larry David dealt with the concept of therapy, I remember my laughter was laced with some measure of anxiety as well. "Oh man, LD is totally right." Often I hear things like, "he/she is projecting" or "I think he/she suffers from a narcissism disorder" and so forth. What's interesting, however, is that such diagnoses are not uttered by professionals like my friend, the clinical psychologists, but rather by those informed in fields other than psychology.
Here is another example.
A friend of mine called me up the other day and, as usual, we had a most interesting repartee. He ended the conversation by saying, "yeah, I won't be calling her any more. I mean, she talks like a therapist. Every time I talk to her I feel like something's the matter with either one of us. I never used to think I was a, uhm, well, a, uhm, disorder."
So, today's feature on the NY Times was of much interest to and mine as it elegantly deals with psychological discourse and erroneous usages in pop culture. Here is a bit:

"We love to label the offensive behavior of others to separate them from us; it’s their problem, not ours. And labels have their periods of vogue (see “chauvinist”).

“Narcissist” is among our current favorites. It has been splashed at bad boyfriends, successful executives, reality show contestants, users of YouTube and Facebook, and, obviously, celebrities.

But while it has acquired a silly elasticity, it has also acquired rich layers of meaning. For though the word has a derogatory stamp, the very people we label narcissistic often are those who attract as well as repel us."
Read more here.
graph per ny times
Posted by B.R. at 8:02 PM

ha! i love that article. so true, so true. All of a sudden everyone's a therapist. sheeesh!

Yeah, 'narcissist' if a high-frequency one over here....

Yeah, like, my grocer's a bona fide Freudian all of a sudden. Good grief!