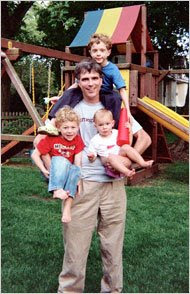 A most inspiring story.
Rest in peace, Randy Pausch. Education is better because of educators like you.
The Ny Times writes,

"Randy Pausch, the Carnegie Mellon computer science professor whose last lecture became an Internet sensation and bestselling book, has died of pancreatic cancer. He was 47.
Dr. Pausch, whose proudest professional achievement was creating a free computer programming tool for children called Alice, was an improbable celebrity. A self-professed nerd, he pushed his students to create virtual reality projects, celebrated the joy of amusement parks and even spent a brief stint as a Disney “Imagineer.'’
Last September, Dr. Pausch unexpectedly stepped on an international stage when he addressed a crowd of about 400 faculty and students at Carnegie Mellon as part of the school’s “Last Lecture” series. In the talks, professors typically talk about issues that matter most to them. Dr. Pausch opened his talk with the news that he had terminal cancer and proceeded to deliver an uplifting, funny talk about his own childhood dreams and how to help his children and others achieve their own goals in life. He learned he had pancreatic cancer in September, 2006."
Read full story here.
Also, here is his presentation from the 'Last Lecture' series:

graph per ny times
video per youtube
Posted by B.R. at 2:02 PM

What an inspiration! RIP, Randy Pausch.

The end of the lecture was spot-on inspiring.