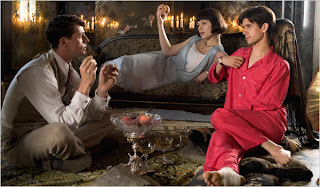 Julian Jarrold's film Brideshead Revisited will serve as a good teaching tool to future filmmakers who attempt cinematic adaptations of literary works. This new adaptation confidently captures the angst of '20-s Oxford students who grapple with things like originating from different socio-economic backgrounds, coming to terms with identity confusions, dealing with familial and familiar tensions, and figuring out dis- and misplaced affections.
Moreover, Jarrold's cast choices are nigh perfect. Emma Thompson plays the role of the ruling matriarch most dexterously and Matthew Goode's rendering of the innocent non-aristocratic boy caught in a love triangle with two privileged siblings is another solid performance for the generally quiet British actor.
The NY Times review says:
"“It exposed some of the myths I’d had about ‘Brideshead,’ ” Mr. Jarrold said of his rereading. “I’d had the memory of it being a nostalgia trip about the passing of English life and a bygone era, a glorification of aristocracy — about people wearing odd clothes and poncing around Oxford.” That was part of it, he said. But there was also a bite and a sharpness that are as relevant now as they were in 1945, when the novel was published.

“One of the reasons for the book’s popularity is, it is an archetypal type of story of this young individual from a poorer, less interesting background who is welcomed into this beautiful, magical, alluring kingdom with wonderful, magical people,” Mr. Jarrold said. “And then he begins to realize that everything is not what it seems.”"

It's a solid performance coupled with a more than adequate cinematography.
graph per ny times
Posted by B.R. at 10:56 AM

I also really like Matthew Goode. He was good in Match Point too. Will go see Brideshead. How did Jarrold capture the homoeroticism aspect of the book?

yeah, the tailer looked like this was a kind of movie to watch when it was raining outside on a weekday. we'll get some rain soon, so, i'll see it :)

the preview seemed like a bore, but i'll give it a try.

Btw, just heard that Emma Thompson is to write the screenplay for the remake of My Fair Lady.