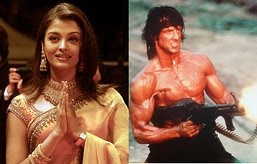 When it comes to the Hollywood to Bollywood move, globalization might not work quite as fast.
The Wall Street Journal features an article on the topic. A bit says:
"Indian moviegoers, too, are seeking familiarity. So far Hollywood seems to understand that in India, one must do as the Indians do. In November, Sony Pictures released "Saawariya," the first Indian movie financed from abroad. "Saawariya" has Bollywood written all over it: song, dance, love story -- all the usual ingredients. Hollywood knows what sells in India; it is not about to replace a formula that sells 3.6 billion tickets annually.
...

In India, Hollywood will become at most an alternative form of cinema for a greater number of Indians. Bangalore may love Rambo, but there is no shortage of fanfare for Aishwarya Rai, Bollywood's premier actress, in the city. Americans, too, may start warming to Indian culture, but the long reign enjoyed by the likes of Mr. Stallone is not about to end. Globalization can wage a long war to remove barriers between nations, but this is one battle it is not going to win anytime soon."
The rest is here.
Posted by B.R. at 11:31 AM

Makes sense, when in India....

the article for some reason stipulates that globalization is actually a form of colonialism...? Hmm. Or maybe I misread it.....