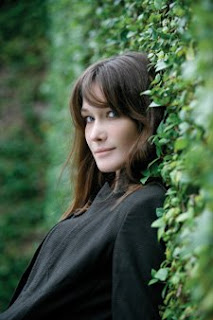 While we're not likely to see Carla Bruni perform with the remaining members of The Who for VH1's Rock Honors, we are more than likely to read about her in the papers.
Barbara Walters announced today that she will be interviewing Mrs. "Bling Bling" Sarkozy in Paris thus joining the hordes of other journalists who are taken by the French First Lady.
While I won't be rushing to the store to get my hands on her music, I, mot likely, will not stop from reading the mainstream US and European articles on her and Sarko. Well, how could I not?! These guys are everywhere! Take a number, Brangelina. In France, at least, Sarko and Carla call the shots.
Read more here.
graph per blackbookmag
Well, I thought I'd also include her track Quelqu'un m'ha dit.

I didn't know La Sarko was a singer.
If that's her actual voice, chick's not too shabby.

she reminds of the merits of ali lohan :)

Yup, first there were The Beatles, then Madonna and then, duh, Carla Bruni. Puuuhhhlease!