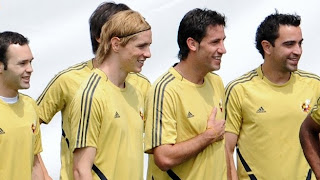 Alas, Euro 2008 ended yesterday. And, alas, Germany didn't win even though Ballack tried harder than we thought he could.
But someone had to win and that someone was Spain. They played better. So, for once, the soccer gods favored those played well. I bet Zidane is saying to himself, 'tja, where were those guys when we played Italy in '06?!'
Congrats Xavi and friends, the cup suits you.
graph per euro2008.uefa.com
Posted by B.R. at 1:04 PM

are you sure about that?

I'd be sure about it. :) Spain deserved to win, sorry Deutschland :(

i rooted for spain in every match but this one. that said, they played the hell out of that match and deservedly won. germany seemed to have a hard time following through on a lot of the plays, be it because spain was too good at defense or whatever other factors weighed in. i'm reminded of a chant from a previous tournament, "deutschland, deutschland, auf widersehen..."