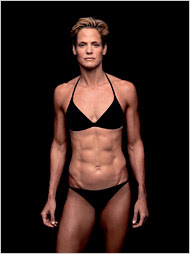 Dara Torres is a true inspiration. I have always been a fan of the Olympics. The whole experience is electric. One more reason to watch the Olympics closely this time around is Dara. At 41, the uber-fast swimmer is all about competing and winning.
The NY Times features Dara today as a 'swimmer of a certain age' who wants to compete at Beijing.
"TORRES LOVES TO WIN, but not as much as she hates to lose. Growing up in Beverly Hills, the fifth of six children and the older of two girls, Torres started following her brothers to swim practice at the local Y.M.C.A. at age 7 and later joined the Culver City swim team. As a kid, Torres didn’t have much of a work ethic, but she did do whatever it took to come in first. Torres’s mother, Marylu Kauder, a former model, told me that one of her earliest memories of her daughter swimming was watching Torres during practice swim halfway across the pool and then stop and turn around so she could beat her teammates back to the wall. Torres lived a privileged life — her childhood home had 10 bathrooms. Still, when she broke the world record in the 50-meter freestyle, at 14, the achievement didn’t seem to impress or surprise anyone much in the Torres household. As Torres recalls, her brothers said, “Congratulations, whatever.” Torres’s own response wasn’t far more pronounced: “Someone told me I was the fastest in the world, and I thought, O.K., that’s neat. But those things really don’t stay with me.”"
Read more about Dara Torres here.
Good luck, Dara!
Posted by B.R. at 3:44 PM