Amy Winehouse and Duffy Don't Quite Cut It 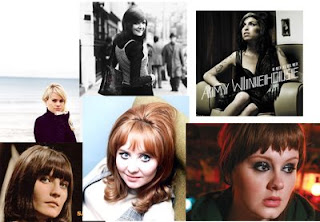 Very good paragraph from Carrie Bronstein over at Monitor Mix.
"So, I think what irks me about the new British "soul" singers is that they feel like a gimmick. Maybe enough time has passed so that few people know or remember the style in its earlier form. Maybe the oldies need a face lift. But does each generation need their own, updated and made-over version of the late greats? Shouldn't the late greats be met with the new greats? Personally, I'd argue for the latter."

I agree. Whatever happened to novelty? Whatever happened to truly great music that's informed by tradition but also dares to innovate and engender novelty.
Yes, Amy, Duffy et al., if I feel like listening to true soul, I'll turn to my Dusty Springfield and Cilla Black. Don't get me wrong. I'm not against new artists relying on older art forms, Heck, I like punk rock which by definition lies on a bed of tradition. What I am also saying is that some measure of complete innovation needs to be provided as well. The audience is not gullible and truly great music is ingrained in our respective DNA. We do know what the oldies gave us. We just hope to see highly qualitative music from the new artists as well.
So, while Starbucks stores keep selling new ' British soul' CD's, I'll take a small measure of pride in the fact that other music lovers out there have not forgotten the genius of the oldies but goodies.
graph per monitormix
Posted by B.R. at 1:19 PM

Imitation gone wrong..., I've always thought so, yeah. I keep asking myself why these performers tend to come out of the UK. Hmm. I mean, is soul a British tradition?

I also find it peculiar that so many soul performers are coming out of England.
I'd like their music better if thy modernized it some....

Amy was fine at first. It's all the new ones that I can't seem to enjoy. Easier to imitate than innovate, I guess.