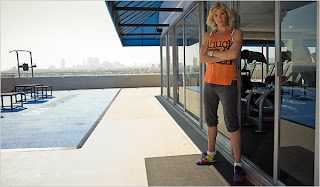 If you're interested in watching affectation at its best and a hub of stereotypes covered in LA-styled everything, watch Bravo's Workout.
First off, the reason why I'm blogging about this is because of this NY Times article about it. In the words of my good friend, Joanna, the poet, 'yee gads!'
The article, like the show itself, reeks of stereotypes which I suppose, is what makes it bearable to read. The only decent line in it states: "WorkOut's Jackie Warner Fails to Work Out."

Friends of mine encouraged me to watch the show's premiere. I did. I have yet to waste a precious hour the way I did Tuesday night at 10:00 ET.
Not only did the show not entertain or give me tips about working out (as, well, it purports to be a show about working out, after all, or so I was led to believe...), but I have yet to feel more guilty about time management, or should I say mismanagement.

The star of the show is Jackie Warner. Warner seems to be fully enamored with her own image. This 21-century, LA Narcissus seems dismissive of others and fully and immodestly unapologetic about self-love. And, like most bona fide narcissists, Warner demands that it all be about her all the time.
I suppose it makes some measure of sense that the show be the way it is.
I just know it's not something I want to watch.
It perpetuates fully foibled perceptions of what some call 'California folks' and it fails to impress on all accounts.
I don't know about you but I'm retiring my remote control. Larry David's Curb Your Enthusiasm is, still, the only reason to watch some TV. And it's not even TV, I'm told, it's HBO on Demand.
And Bravo's WorkOut might just work out if it actually features some working out. But I seriously doubt it will ever deliver.
Posted by B.R. at 10:04 AM

I like Jackie. But I'm not liking the new season. Too much Jackie and not enough of anything else.
Too plastic.
But I still like Jackie.
I see what you're saying though and I still think you should watch it. I know you get a kick out of kitsch things. Enjoy it! Kitsch is cool!

What's more amazing is that there's a Season 3....

Shout-out to Jackie, the Ohio girl.
I actually don't think much of the show either. I wonder if they try to make it as 'kitsch' as it is on purpose.
Ohio folk don't tend to be as superficial.
But then again, I generalized again.
I'm glad I skipped the opening episode. You usually have sth positive to say about most things so if must have been truly brutal.
Thanks for the reviews, Bri. I'm your reader now!

I SO can't even be bothered....hmmm...does that make ME the narcissist extraordinaire??

You know, when this show first started...I had such a crush on Jackie! But now I am disgusted, as a gay woman, that she only seems to be in love with sleeping with straight women! How egotistical and just wrong. She needs to own up to her 'gay' identity and be in a real relationship...not just see how many straight women she can get.

i'm with polly. can't even be bothered. she's just not edgy or hip enough for 2008.
does this make me a narcissist?

I agree with Anonymous. Jackie's TV 'sexuality' is way too manufactured. If she were a 'heteronormative' I doubt she'd get as much personal attention.
But I disagree with the anonymous that she's actually trying to lounge at others. Has Anonymous actually seen the show?!
I hope you see the second episode. It's actually quite work out-y and you might enjoy. Well, maybe the first half.
And if I could add something else, Jackie Warner should not be viewed in an essentialist way. But then again I see how Bravo is depicting her and people like Anonymous are justified in their reactions.
Tell me what you think of the second episode if you choose to make time for it and see it.